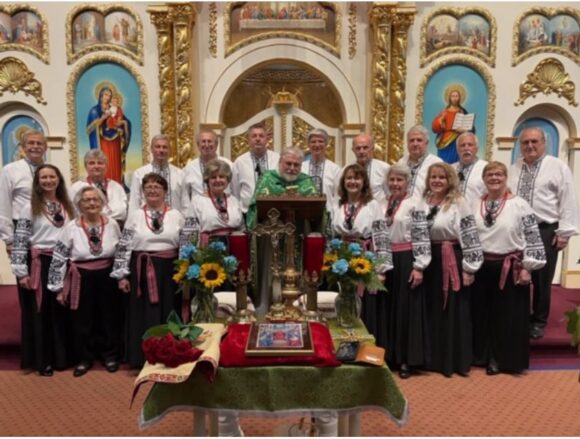 A Ukrainian choir will perform at the ‘Art Under Siege’ fundraising exhibit at Lyme Academy today; All welcome

On Sunday, June 12, CT’s Yevshan Ukrainian Vocal Ensemble will perform at Lyme Academy’s Sill House Gallery in Old Lyme at 1 p.m. The choir will sing traditional songs of Ukraine along with the country’s national anthem. Everyone is welcome.

OLD LYME — beleaguered art is currently showing at Lyme Academy of Fine Arts in the historic Sill House on the Academy campus on Lyme St. The exhibition is presented by Old Lyme resident Barbara Shriver and will run until June 19, 2022. Opening hours The opening hours of the gallery are from Wednesday to Sunday, from June 8 to 12 and June 15-19, from 12 p.m. to 4 p.m. 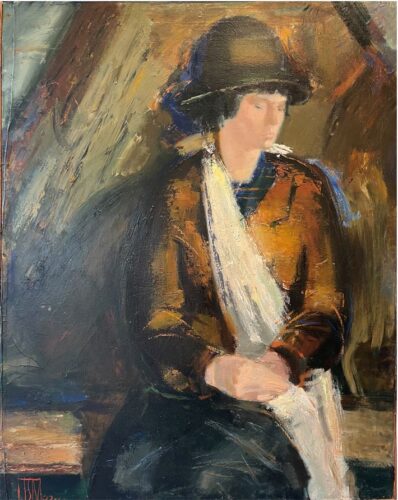 “The Girl with a White Headscarf” is one of the paintings featured in the Ukrainian Art Exhibition.

The unique collection of Ukrainian art spans the period from 1945 to 2001, with over 50 pieces collected by Barbara during the time she and her husband, Dick, lived in Ukraine.

A gallery opening was held on Sunday, June 5 at the Sill House Gallery and raised an initial $10,000 for fundraising efforts to benefit Ukrainian charities.

Next Sunday, June 12, Ukrainian vocal ensemble Yevshan from CT will perform at the Sill House at 1 p.m. This choir will sing traditional songs of Ukraine along with the country’s national anthem. Everyone is welcome.

The Lyme Academy of Fine Arts donated the gallery space, its share of the proceeds from the sale of the artwork as well as the installation for this special exhibition.

The Shrivers have lived and worked in Ukraine since the last days of the Soviet Union and then the 10 years following Ukraine’s independence from 1990 to 2001.

A significant portion of the artwork was acquired from an art portfolio from 1945 to 1990, featuring portraits and scenes from Crimea to Kyiv and the countryside in between. 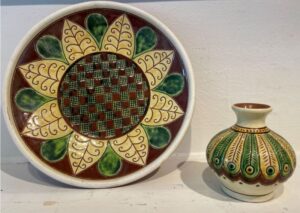 Traditional Ukrainian pottery is featured in the show/fundraiser at Lyme Academy.

Unless they adopted the rules prescribed for official Soviet art, dissident artists were persecuted and harassed in various ways, including being barred from purchasing essential materials such as paints and canvas.

Among the artists highlighted in the exhibition are Victor Zaretsky, a notable figure in Ukrainian socialist realism and Soviet nonconformist art, influenced by Gustav Klimt. Works of art by Miskevich of L’viv, known as “Andy Warhol of Ukraine”, are also on display. 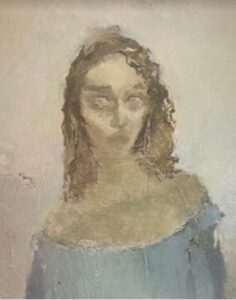 Yuri Charnovsky’s “The Mourness” is one of the artworks featured in the show.

According to Barbara, “For me, a lot of this art reflects the impact of the form of government on the way artists paint. These paintings made under Soviet tyranny are quite different from paintings produced in an independent Ukraine.

The ‘Art Under Siege’ exhibition can be seen at Sill House Gallery, June 8-19 (Wednesday-Sunday) 12pm-4pm.

Two-thirds of the proceeds from the sale of artwork will be donated to Ukrainian charities, including the Ukrainian Catholic University (based in L’viv, Ukraine) and its program for war refugees.

Another charity beneficiary will be the Boyarsky Orphanage of 88 young children which was forced to flee the Kyiv region earlier this year and relocated to Utsk, Poland.