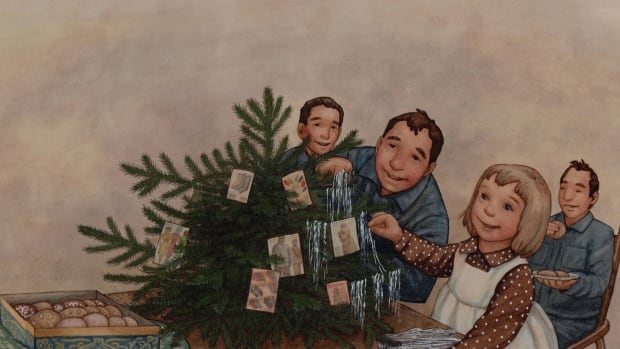 War can be a complicated subject to fully understand, especially for a child.

But Vancouver-based Michelle Barker is trying to foster understanding of the subject with her new children’s book, A Year of Borrowed Men.

It tells the story of a child living on a German farm during World War II who finds compassion for three prisoners of war. The book is CBC British Columbia’s official nomination for the 2016 TD Prize for Canadian Children’s Literature.

“I feel like I won just being nominated,” Barker told host Sheryl MacKay on CBC. from north to northwest.

A year of borrowed men

The story – which actually started as a homework assignment while Barker was enrolled in UBC’s MFA program – is based on the life of Barker’s mother, who lived through the experience described in the book.

“We were doing a section on historical fiction, [and our professor] wanted us to choose a period of history that we were interested in and write something for children,” she said.

“The first thing I thought of was my mother.”

As a young girl, Barker’s mother lived on a farm in northern Germany during World War II – a time when all the men in the family had been sent into combat.

“The farm still had to operate – so the government decided to send POWs to work on the farm, and they did so under very strict rules,” she said. “German farming families were not allowed to treat them as guests or even as workers – they had to treat them as prisoners.”

But when the three prisoners arrived, Barker’s mother befriended them. In fact, Barker says, the whole family took them in, letting them eat at the table, which the German government banned.

Barker says she had to put herself in her mother’s shoes to try to imagine the complicated relationship of “befriending the enemy.”

“She was a kid, and that’s what kids do. This whole idea of ​​talking to them and saying, ‘He’s the enemy’…it just doesn’t make sense to them. I think that these are barriers that adults create, and I think kids don’t see those barriers.”

Time capsule contest: draw what matters to you

The main character of A Year of Borrowed Men is called Gerda, and in the story she draws a picture of what is important to her when she was seven years old.

To celebrate the book, from north to northwest invites students aged 5 to 12 to draw a picture of what is important to them.

Once the drawing is complete, you can take a photo of it and email it to [email protected] with “Time Capsule Contest” in the subject line.

One winning entry will be drawn on December 3 and that child will receive a copy of this year’s five nominated books for their school library.

You can discover the rest of the books by going to CBC Books.

With files from CBC’s North by Northwest

To listen to the full interview, click on the audio titled: “A Year of Borrowed Men”: the author tackles World War II through a powerful children’s book.

2016-11-17
Previous Post: After his military service, a veteran finds a new purpose by creating children’s books
Next Post: Letter from children’s book author Beatrix Potter to the Cumbria auction