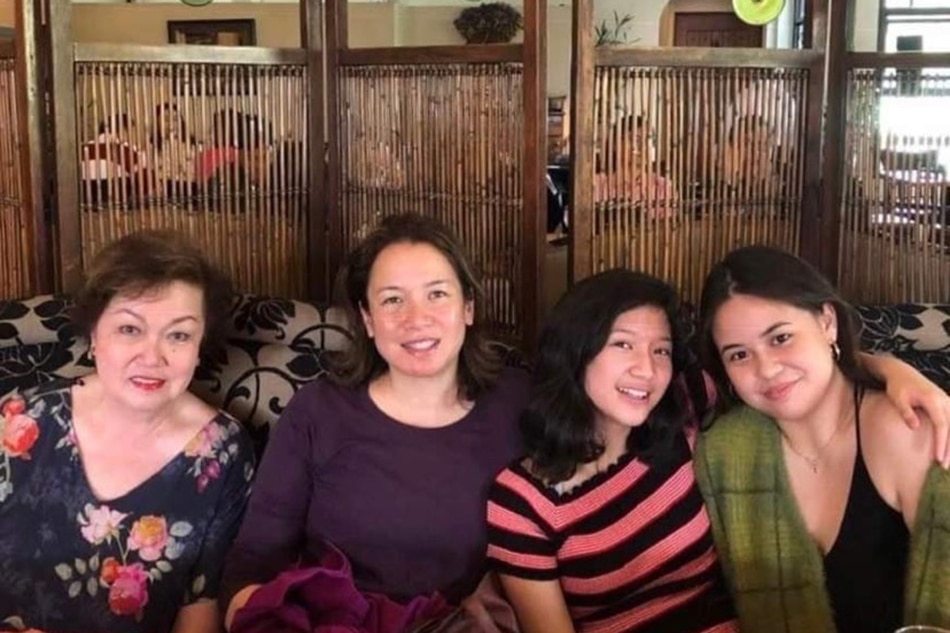 MANILA — When Elaine Ongpin Herbosa and her husband were in Paris, France, a few years ago, their retirement home was under construction somewhere in the south of Metro Manila.

“I wanted our home to be colorful, happy and still see rainbows in our retirement years,” Herbosa told ABS-CBN News. “I asked the waiter what arc-en-ciel was in French and he wrote it helpfully on a napkin – L’arc en ciel. This was the birth of my new world.

Throwing in the towel as a stockbroker became an easy option for Herbosa in 2002. “The stock market was down when I decided to take over art, which was then on the back of my life,” she shared.

“Also, it was like a baptism of fire when I had to create my gallery to accommodate [daughter] Mia’s Big Show When She Got Her School’s MacDowell Scholarship »

Herbosa, who counts Bobby and Jimmy Ongpin as her esteemed brothers, has two children. Alfonso is the eldest, while Mia is his youngest daughter.

The adjacent building across the yard from their home became the permanent site of the private art gallery, which Herbosa called The Rainbow.

“In the year 2000, Mia won the Art Students’ League of New York’s biggest prize – the Edward MacDowell Scholarship,” Herbosa said. “Holder of three certificates each covering four years in painting, lithography and sculpture, she received a scholarship to travel to 27 art capitals in Europe, thus broadening her vast knowledge of art.”

The mother was lucky enough to be her daughter’s halfway traveling companion.

“Mia was bound to have a show in New York to prove why she was worthy of being the recipient of the coveted award. It was a huge success.

“Then she wanted to take this show home to share it with her compatriots. She wanted me to book a gallery. With such short notice, it was an impossible task. A light bulb flashed in my head and I converted my entertainment space [which was on its finishing stages then] in a gallery.

Mia shipped and insured each piece home at “crushing costs.” The show in Manila was well attended. “It catapulted her to much higher levels in the art world,” Herbosa said. “After two weeks in Alabang, we lent the exhibition to The Drawing Room, a Makati gallery.”

Today, two decades later, The Rainbow Atelier, Inc. is busier than ever
.
“Painting, teaching, hosting many, many shows,” Herbosa said. “I’ve created a second home for talented artists, some of whom have grown with their wings.

“I have taught hundreds of students aged 6 to 87. I feel blessed to have nurtured artists for all these years.”

Over the past two decades, Herbosa has always welcomed and mentored budding artists into its gallery. She was a gracious owner and teacher, who shared not only her talent, but a part of herself with the artists of the new generation.

She stood guard, oblivious to the intense summer heat, to man the exhibit booth at Art in the Park. She allowed her students to shine and make a name for themselves afterwards, by teaching them the basics of painting.

The rainbow actively participates in exhibitions every three to five years in prestigious museums, galleries and art fairs.

“All of our shows have been big hits every time,” Herbosa said. “Mostly in Artistspace, Ayala Museum, Altromondo, Rockwell 8, SM Aura and SMX for Manilart, Tagaytay Highlands. I have never advertised for my art school. People came to me by word of mouth.

This pandemic, L’arc en ciel Atelier naturally closed shop, especially during the confinements, but still did shows online. However, there is nothing better than face-to-face shows with opening cocktails.

“We had a great show in October 2020 featuring three of the top watercolorists in the country and it was a smash hit,” Herbosa said.

“Now, in the new normal, we open our doors on April 7th for ‘Passing the Torch: A Celebration of Art and History,’ featuring my daughter, Mia Herbosa, myself and two granddaughters. daughters – Nina Herbosa and Lana Agoncillo.”

Herbosa “passes the torch” to a new generation of artists in his family. Nina, Alfonso’s daughter, She studied at Beacon Academy in Laguna for high school. She submitted an art portfolio which won her a scholarship. She maintained excellent grades and the scholarship lasted all the years she was there.

Painting since the age of six, Nina participated in numerous school art shows, where she sold her work, as well as the Rainbow shows, according to Herbosa. Currently, Nina is in her third year at Ateneo de Manila University and plans to pursue a medical degree.

Meanwhile, Lana Agoncillo, Mia’s 19-year-old daughter, was born and raised in New York City and attended Waldorf School in Brooklyn. Lana is inclined to get into interior design when she goes to college. The April 7 show is her first, apart from those staged at her school earlier.

“Since her earliest childhood, Lana has been drawing and painting in her own style,” Herbosa said. “Representations of our family like cartoons. Some quite poignant that I have framed and immortalized in my room and at home.

Without a doubt, the mom is very proud of her daughter Mia, one of the greatest portrait painters in the country. “She is a gift from God to our family and our country,” Herbosa beamed. “Twenty-eight years in art school is unthinkable, isn’t it? But Mia loved it in New York.

“Every time she visited Manila, she gave art workshops. So far they are asking for more. There is a long waiting list for those who want portraits of Mia.

As for Herbosa, she reinvented herself admirably in her retirement years, going from stockbroker to artist. “I owe it to Mia, who has inspired and selflessly mentored me over the years,” the mother acknowledged.

“Roman Ongpin supported and fought the cause of the Katipunan by providing armaments and funds,” Herbosa explained. “He created El 82 in Binondo, a hardware store that sold imported art materials and set fixed prices.

“Notables like Juan Luna, Felix Resurreccion Hidalgo, and Fernando Amorsolo frequented his shop and befriended his son, Alfonso T. Ongpin, who later amassed an enormous art collection, including their own.

“And that’s how the genes got passed down to us,” Herbosa said. “Indeed, it runs in the family.”

On Herbosa’s side, Herbosa’s late husband, Poch, was from the branch of Lucia Rizal. “She married Mariano Herbosa, my husband’s namesake. José Rizal was his great-great-uncle.

“Some of Rizal’s genes must also have been inherited by Mia and my two granddaughters. For indeed, apart from patriotism and bravery, he was also an artist. And a doctor, among many other talents.

So, is Herbosa finally saying goodbye to the art world? “I now really want to retire, but it seems very difficult to do,” she admitted. “Most artists are still tied to my apron strings. (Ri)

“We hope to share with you our art, however varied, to show you how we ‘pass the torch’. May our ancestors smile at us. It is our destiny.