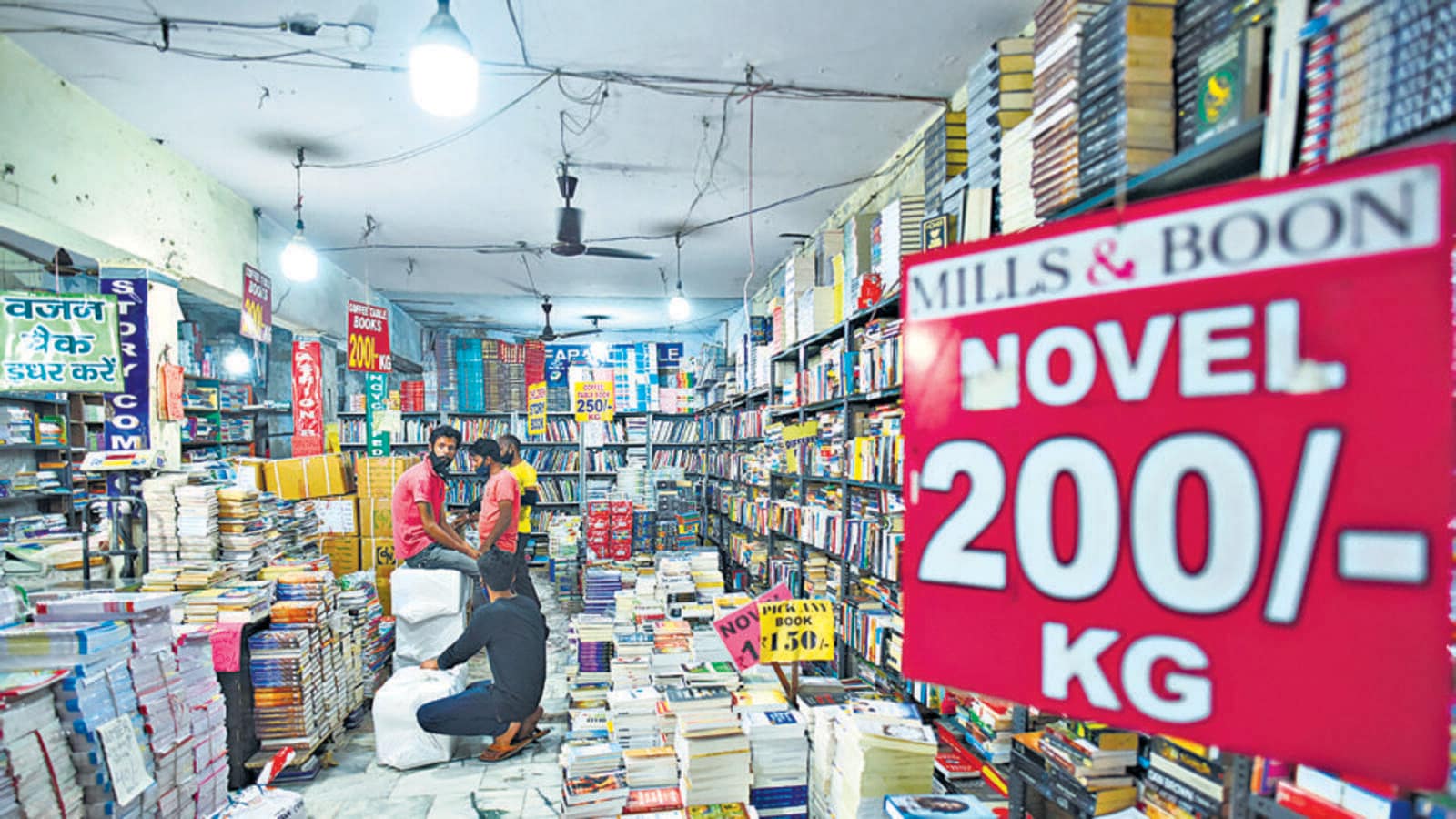 It’s afternoon and Abhishek Jain, who runs Big Book Bazaar in Daryaganj, is busy weighing stacks of books selected by his customers. The shop, teeming with customers, sells books by weight. “Eighty percent of my customers are used book dealers from all over the country, buying between 100kg and 1,000kg of books,” says Jain, sitting at the counter of his shop which has stacks of books. divided into different categories. – novels, coffee table, children’s storybooks, Mills & Boon, Hindi literature – all priced between ₹150 and ₹200 kg per kg.

There are scales placed in different places for customers to weigh the books they want to buy. But the Big Books Bazaar is not the only bookstore of its kind.

Daryaganj may no longer be home to the iconic Sunday Book Bazaar, a popular 50-year-old weekly book market that was moved to the nearby Mahila Haat about two years ago, but more than a dozen bookstores perms have sprung up in Delhi’s central market in recent years. Much of the books on the market are excess stock from publishers and libraries in the US and UK, and those donated or sold by individuals. “We import nine shipping containers of books from these countries every year. They are all original books,” says Abhishek.

A few meters from his shop is Book Affair, one of the largest and busiest bookstores in Daryaganj. Mayank Jain, who runs the shop with his father, says they also buy excess stock from Indian publishers. “We recently bought about 20 tonnes of books from Westland Books, which closed down,” explains Mayank Jain.

It’s afternoon and his shop is crowded. Its customers, he says, include book lovers, libraries across India and more than 500 booksellers who sell second-hand books online through e-commerce sites and Instagram. “They buy hundreds of kilos of books from us at preferential rates,” says Mayank, which, like many other bookstores in the market, has warehouses in Burari and Kheda, on the outskirts of the capital.

While most of the books in his shop cost between ₹200 per kg, the most expensive — sold at ₹500 per kg– are in a section devoted to vintage Penguin paperbacks, many of which are over 70 years old.

Many online booksellers testify that Daryaganj is a major source for wholesale purchases. “It has some of the largest importers of used books and has become the largest used book wholesale market in the country. We buy a lot of our books there,” says Vidyut Sharma, co-founder of Bookchor, one of India’s largest second-hand book platforms.

While the bulk of the books in these stores are popular fiction titles from writers such as Lee Child, Stephen King, Cecilia Ahern and Nicholas Sparks, one can also find bestsellers from literary giants such as Elena Ferrante, Paul Auster, Orhan Pamuk and Tony Morrison. among others. “Over the past three years, I have built up a whole personal library with books, including many rare ones, purchased from these stores. I bought for ₹50 brand new imported editions of literary novels that cost otherwise ₹2000 on Amazon. But you have to spend time here and do extensive research to find such books,” says Rahul Khanna, a content writer, who is a regular at these Daryaganj bookstores.

During her last visit to the market on Thursday, Khanna bought 5 kg of books from ₹200 per kg which included Klara and the Sun by Kazuo Ishiguro, Any Human Heart by William Boyd, Bad Girl by Mario Vargas Llosa and over a dozen novels for his teenage daughter. “But I spent almost two hours going through piles of books here.”

Rishabh Dhawan, who opened Dhawan Books in the market last year, says he recently sold 18 tons of books to a second-hand bookseller online. “Basically, about 10% of the 20-ton books in a shipping container are pretty good quality and recoup the cost of the whole stock,” he says, pointing to a shelf with a set of books. by Lucy Maud Montgomery in pristine condition that were among thousands of books that arrived in a recent shipment. “Not just book wholesalers, my shop also attracts many book collectors. While some of my customers are very knowledgeable about books, others just buy hardcover copies to decorate their living rooms.

Most of these bookstores in Daryaganj used to be clothing and shoe stores until a few years ago. Today, there is a huge demand for space for bookstores in the market, and some of those looking to open bookstores are those who used to sell books at the Sunday Book Bazaar. But not everyone can afford the high rents. Current bookstores pay anything between ₹75,000 to ₹3 lakh per month rent, depending on the size of the store.

“Sunday Books Bazaar had earned Daryaganj a reputation as the ultimate destination for affordable second-hand books, and a lot of people want to take advantage of it,” says Arun (he only uses one name), who opened his bookstore four months ago in the market. His family, he says, have been in the used book business for around three decades and have also sold books at the Sunday Books Bazaar. “We desperately wanted to go back to Daryaganj,” he says. “I get a lot of books from the personal collections of people in Delhi and the NCR.”

Unlike the Sunday Books Bazaar, these bookstores stay open every day of the week, but Sundays, says Arun, are the best days for business. So, what are the current bestsellers in his shop? “The stock books, and the buyers are young people who want to invest in the market. Second, books by writers like Stephen King, Agatha Christie always sell out fast. I am sure that in the years to come, Daryaganj will become world famous as a second-hand book market,” he says.

But some booksellers fear that pirated books will also begin to make their way onto the market. “It could damage the reputation of the otherwise fledgling second-hand book destination. This needs to stop,” said a bookseller who asked not to be named.