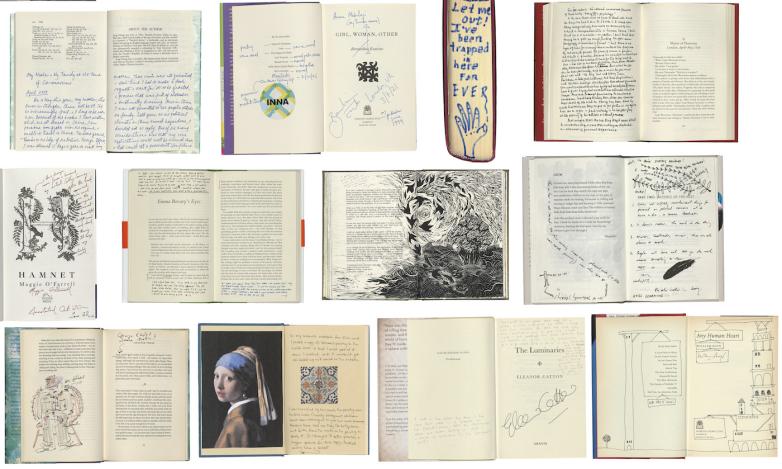 London — Christie’s announcement First Editions, Second Thoughts: An Auction to Benefit English PENa historic literary auction that will take place online from June 28 to July 12 and will include first-edition books and works of art by contemporary artists and authors, each of which has been uniquely annotated, illustrated or supplemented by its creator.

The heavily annotated first editions of Hilary Mantel Bring up the bodies and The mirror and the light from his acclaimed Wolf Hall trilogy are both up for auction. Since its inception in 1969, only four writers, JM Coetzee, Peter Carey, Margaret Atwood and Hilary Mantel, have won the Booker Prize twice. Original editions annotated by these four authors are offered at auction.

Each of the first edition books is hand-annotated, a unique record of the author’s response to his own work. Hilary Mantel comments on the experience: “The process of publishing (although welcome and necessary) is a process of moving away. Annotation gives you back your book, but presents it multiplied. It saves you from the finished product, sends you back to the process. It gives shape to the subvocal commentary that accompanies each working session: “I could… but I won’t… and yet I could try…”. A special type of memory comes into play – how you were when such a sentence came, where you were: the way the light fell in the room. It is a creative as well as a re-creative process. Sentences thrash and twist again under your hand. The things you could have said, and the different ways you could have said them, come back into your awareness. You realize, if you didn’t already know, that there is another book behind the book, and behind that, a series of shadow volumes, going back to childhood, before you knew how to write everything “.

PEN English, one of the oldest human rights organizations in the world, defends freedom to write and freedom to read worldwide, and is the founding center of PEN International, a global association of writers with 145 centers in more than 100 countries.

Philippe Sands, Chairman of English PEN and Professor of Law at University College London, comments: “It is exciting to embark on a First Editions, Second Thoughts auction with Christie’s. I am truly delighted to add such illustrious names to an annotated edition of East West Street, whose focus on international crimes takes on particular resonance in the face of Russia’s crime of aggression against Ukraine. Here in the UK and around the world, the rule of law is more important than ever, as intolerance, division and threats to free speech are on the rise. Today, the work of English PEN is more important and relevant than ever, and this wonderful auction will help it in its vital work.

Margaret Ford, Christie’s International Head of Books and Manuscripts, comments: “Christie’s is delighted to support the important work of English PEN by presenting an extraordinary range of literary masterpieces at auction. These works, uniquely annotated by their authors for the auction, offer new insights into the work, life and career of some of the most important writers of our generation. As such, they are ‘disc copies’ that will excite collectors, readers and literature enthusiasts everywhere.’

Daniel Gorman, Director, English PEN, commented: “It is an honor to partner with Christie’s to bring this auction to the benefit of English PEN, as we continue the increasingly urgent and vital work of campaigning for writers at risk and for free speech in the UK and across the world. We are extremely grateful to the contributors, some of the most well-known and beloved authors and artists of our time, who have generously looked back and annotated some of their finest works.

Mark Wiltshire, Books and Manuscripts Specialist and Head of Sales comments: “It is a great privilege to manage the sale of these amazing books in support of English PEN. The authors’ annotations are personal, deep, insightful and often surprising, adding a unique layer of intimacy to some of the most famous texts published in our lifetime. To read them is to feel incredibly close to the creative process. I expect strong interest from collectors and institutions around the world.

A selection of lots from First Editions, Second Thoughts: An Auction to Benefit English PEN will be on view and on display until June 15 as part of The Art of Literature: Auction Highlights exhibition taking place at Christie’s Headquarters in St James’s , London, as part of London Now. Please see www.christies.com for times.

All lots from the First Editions, Second Thoughts auction will also be on display and open to the public in a stand-alone exhibition July 8-11 at Christie’s.