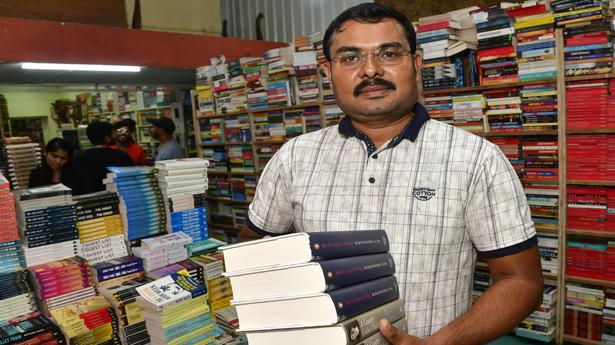 It was somewhat by chance that “Bookworm” Krishna, one of the go-to people for all bibliophiles in town, ended up selling books in 1997 rather than onions.

Recounting how he came to sell books 25 years ago, Krishna Gowda said that after completing his pre-university education he had to look for a job due to financial constraints at home. “My uncle had an onion shop in Mysuru and asked me to work in the shop during the day and join an evening college. But Mayee Gowda from Blossom Book House, also from my village, Rangasamudra, Mysuru, had already come to Bangalore and was selling books on the sidewalk of MG Road and asked me to work with him. That’s how I ended up selling books in 1997 and haven’t looked back since,” he said.

To mark the 25th anniversary of his joining the business, one of his loyal clients, VR Ferose, has made a documentary called “The Bookman of Bengaluru”, which will be screened at the Bangalore International Center on Sunday evening.

From 1997 to 2001, he worked with Mr. Mayee Gowda, even while he was pursuing an undergraduate degree at an evening college. He struck out on his own launching Bookworm, first on the MG Road pavement in January 2001 and moving into a shop in 2004. At one point he owned three shops, including one dedicated to children’s books . Now Bookworm has run out of a sprawling two-storey store on Church Street. “If I grew up, it is only thanks to the bibliophile community of Bangalore and its support. While the book trade has been financially rewarding, it is probably the only trade that is also intellectually rewarding,” Mr. Krishna Gowda said.

City historian Ramachandra Guha, a loyal Bookworm customer, said he enjoys browsing and buying books at the store. “I am not biased between Blossom Book House and Bookworm and buy books from both. A city like Bengaluru should have had very good public libraries and in their absence people like Krishna fill the void to some extent,” he said. He will also speak at Sunday’s event.


Bookworm will soon expand its online footprint with a mobile app where you can browse the catalog, order books and have them delivered to your home. “Today, readers are moving more and more online. So we are going there too,” said Mr. Krishna Gowda of Bookworm. A new branch of Bookworm is likely to spring up on the Outer Ring Road near Hosakerehalli, from where the online business will operate, by the end of the year, he said.