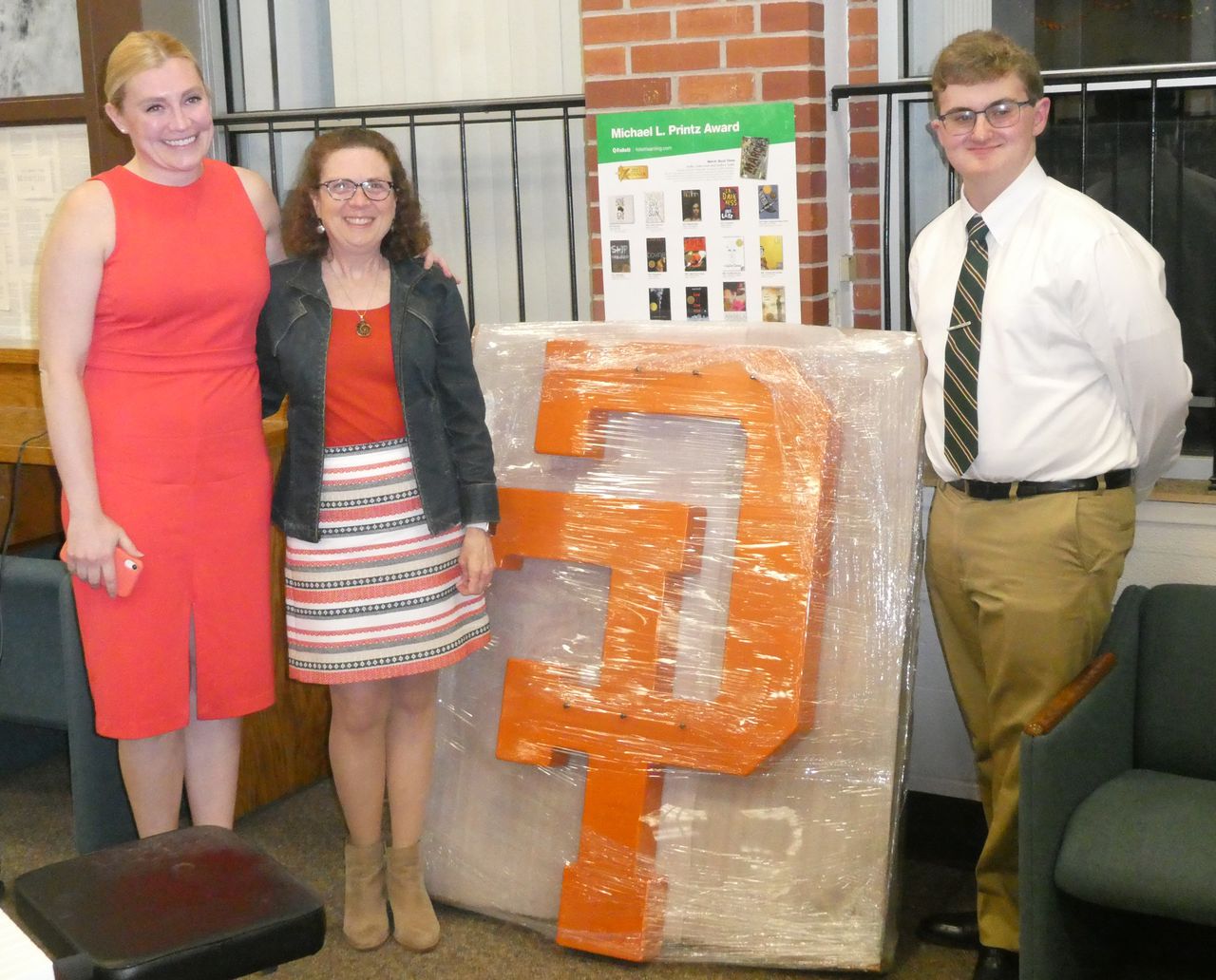 CHAGRIN FALLS, Ohio — Eric Morrison wanted to do something special for his graduation project at Chagrin Falls High School.

Eric was interested in doing a welding project through the Excel TECC program in which he participates. He also wanted to create something he could contribute to the school district.

But most importantly, Eric created his project – which he calls “the Big CF” – as a service to promote trades and raise awareness of “how trades die,” he told the Council on Wednesday. Chagrin Falls Education (May 18).

“Most people are just encouraged, ‘Go to college, go to college,’ and they spend hundreds of thousands of dollars a year,” he continued. “There’s almost $1 trillion in student debt because people think college is their only option.

“And we don’t promote trade schools to let people know they exist. I think it’s a shame because if people realize they have a talent for one thing and can work on it, they can accomplish so much more.

Eric’s talent for welding became evident when he pulled off a sheet to unveil “the Big CF” to the board and those in attendance. It’s a large orange sculpture he made of the letters “CF” – resembling the district’s logo – that will hang on a wall in the library at Chagrin Falls High School, where Wednesday’s meeting was held.

“I took a leap of faith in doing this project,” he told the board. “It takes courage to do that. It took a lot of courage and a lot of bureaucracy, too much bureaucracy. »

“Choose Courage” was the district’s theme for this school year.

“I didn’t know what I was getting into,” Eric said. “I opened a Pandora’s box and found hope.”

The unveiling of Eric’s project was one of many ways the school board recognized students – all seniors – in the arts during the Student Showcase portion of the meeting.

Janet Coriell, an intervention specialist at Chagrin Falls High School, introduced Eric to a group of seniors she has been teaching math for four years.

“So I spoke to Barb Cymanski, our math coach, and she helped me design a capstone project, a community service project, for each student.”

Eric knew what he wanted to do from the start, but his project was very difficult and complex, Coriell said.

“At first I was a little worried because it was so involved,” she said. “I thought, ‘Does this kid know what he’s getting into and how is he going to get out of it?’

“I didn’t know how many hoops you would have to go through, or how many people you had to talk to or get approval,” she told Eric. “But you jumped through all those hoops and navigated all the unexpected obstacles, and you made it happen.”

Coriell noted that Eric just finished the project a few weeks ago.

“It was painted and powder coated at the shop, and they just finished it (Tuesday May 17),” she said. “Eric and his dad went to Eastlake to pick him up, and while they were there Eric got a job offer when they saw the work he was doing.

“I’m so happy to have been able to work closely with Eric over the past four years,” she added, noting that she’s known him since he was in third grade at Gurney Elementary School, where she worked as a teacher’s aide. “I’m so proud.”

Eric said that since his project was for a math class, it had to involve some type of math.

“The math I involved was finding the dimensions and the weight,” he said. “It took me a good month to figure out what material I was using.”

Eric said the design was “a little problematic” and that many people helped him through the design process. He thanked those at the Creation Lab, at the district’s innovation center, for allowing him to use the technology there to create what he needed.

“It took six months for this project to move forward,” he said. “The fun part was making it happen.

“Manufacturing started on March 4, I believe, and it wasn’t finished until the end of the first week of May. So time was running out to do it.

Eric thanked Superintendent Jennifer Penczarski for approving the project and many other people who helped him through the process, including his Excel TECC teachers, who he says donated more than half of the funds for the material.

Excel TECC is a technical career consortium serving 10 school districts in northeast Ohio that offers more than 25 programs. Its main objective is to prepare students for entry into a four-year college, a two-year technical school, or the career of their choice.

Eric said the Chagrin Falls Dads’ Club and Tiger Prep, a nonprofit support organization for the district, provided the money he needed for the set-up and a plaque he created that will be displayed. with the project.

“These two made this project possible,” he said.

Just before revealing his project, Eric presented Coriell with a bouquet of flowers and they shared a hug.

A council member asked Eric if he had accepted the job offer at Eastlake. Eric said he plans to fill out an application and have an interview next week.

“Eric, thank you for donating your artwork to us,” said Board Chair Sharon Broz. “I didn’t realize we were going to be able to keep that, and it’s spectacular. We will take very good care of it.

“Many students will read your plaque and see with pride what you have created for all of us to enjoy.”

Broz asked Sophia to share information about her winning piece, which she posted. She called it “Beyond the Linear”.

Sophia said the painting was part of the portfolio she did for the high school AP 2D design program.

“I focused on self-healing and returning to a sense of normalcy and balance within ourselves, especially after such a difficult time,” she said.

This piece, Sophia said, reflects “moving from a situation that was very difficult to now returning to normal.”

“It hasn’t been a straight road; it was not an easy process,” she said. “There’s been a lot of ups and downs, and (it’s) just kind of a celebration of that.”

The board also approved a $100 payment from the district to Sophia, in exchange for the use of her winning piece to be displayed on district property for the 2022-23 school year. Broz said he would likely be hanging out in the high school Sands Community Hall.

The meeting opened with a performance of “Vienna,” by Billy Joel, by a group of seniors from the Chagrin Falls High School Choir.

Nate Bachofsky, director of Chagrin Falls High School and Middle School Choirs, said the piece was arranged by senior Jane Peck and conducted by the students for their performance at the school choir cabaret in October.

The singers were accompanied by seniors Annie Mills on fiddle and Trey Taylor on keyboard.

After the show, each student in the group introduced themselves and discussed their future plans, including college and curriculum.

Bachofsky, who recently resigned from his position at Chagrin Falls Schools, said in an email that he had accepted a position with a consulting firm, Thunderbird Leadership, supporting leaders and coaching teams in schools. K-12, higher education and health care.

“It is with bittersweet emotions that I leave my position here at Chagrin Falls Schools,” he said in the email. “I also work on my own music projects and develop community music-making opportunities across Cleveland.

“I’m excited for this next chapter, and I know I wouldn’t be ready for it without my teaching and leadership experience in Chagrin Falls schools.”

Chagrin Falls High School principal Monica Asher said Bachofsky has had a very positive impact on the school culture. She congratulated him on his new position and said he will be missed.