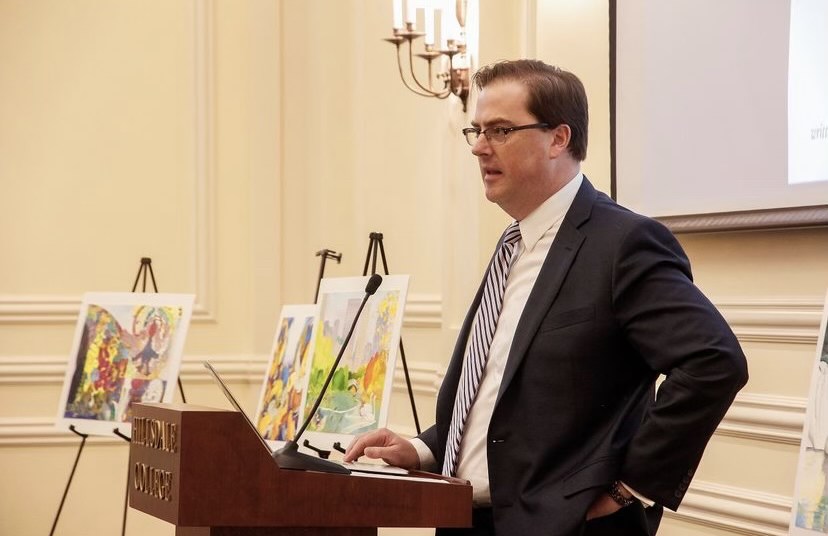 Telling the story of a young swan navigating New York City and discovering his identity, Matthew Mehan’s most recent book offers advice for all readers, young and old.

Mehan published her second children’s book, “The Handsome Little Cygnet,” on July 20, providing children with a counter-culture tale of discovering who they are meant to be, Mehan said.

Mehan, director of university programs at Hillsdale in Washington and assistant professor of government at the Van Andel Graduate School of Government, said the lightly dosed prose is a revision of “The Ugly Duckling” by Hans Christian Andersen.

The story begins with a family of swans in Central Park and centers on a young swan who is in trouble in the big city. The book teaches children and adults a lesson about family and identity.

“It’s a coming of age story,” Mehan said, “and trying to figure out who you are and what you’re meant to be, which is pretty heavy.”

Mehan said that while his book is primarily aimed at entertaining children, it also seeks to instill parental appreciation in children at a younger age than is usually thought. Appreciation from parents often comes later in life, Mehan said, and he intends his book to speed up that process.

“I wish they had some kind of respect for their parents and the way their parents really care about them and try to help them grow up into adulthood,” he said. “I portrayed very careful and loving parents.”

Unlike most children’s entertainment today, Mehan said her books don’t portray parents who are ignorant goofballs, but who care deeply about their cygnet child.

Mehan has also included classes for parents. He said the book is intended to provide an example of parenthood to model even in Mehan’s own home.

“I wanted to establish a model of parenthood that would make any parent try to be better, because I think the opposite is so often the case that children’s literature features stupid fathers and scolding mothers,” a- he declared.

The book is filled with symbolism, but readers will have to find it out for themselves, as Mehan has said he prefers to remain the poet.

“I think any good poet should operate on multiple levels,” he said. “Even children’s books should have a lot of symbolism that takes you to higher and more transcendent things, to deeper and more penetrating truths.”

Mehan has sold over 10,000 copies of his first book, “Mr. Mehan’s Slightly Amusing Mythical Mammals», Following its release in 2018.

During his internship at the K-12 Education Summer Conference in Hillsdale, Jaime Boroema, Sr., helped Mehan sell the book “The Handsome Little Cygnet” and received a signed copy from the author. Boroema said that Mehan’s insight, kindness and obvious love for her job were evident when they first met, and she hopes to one day share her copy with her future children.

“The Handsome Little Cygnet is a beautiful book that manages to touch a large part of life in a very simple and heartfelt way,” Boroema said. “The themes of family, the danger of rejecting loving advice, and the miracle of the second chance are all linked in this seemingly simple story. “

The illustrations are original watercolors by a friend and former colleague of Mehan, John Folley. On the thank you pages of Mehan’s books, Folley designed a Christian humanist symbol called a caduceus, an image of snakes, representing the arts of this world, surrounding an egg, symbolizing the Christian faith. The arts are organized in a way that protects faith in Christ in this world, Mehan said. The symbol is held by two hands, representing the friendship between the author and the illustrator who made the books possible.

“John and I saw our friendship as a wonderful foundation on which to build these two beautiful books,” Mehan said, “and we have plans for three more.”

Hillsdale in DC hosted a preview of the book on July 29, including a read, exhibit by seven of the original watercolors and a commentary on the key themes of the book. After the reading, Mehan discussed the writing process, symbolism, and what is at stake for children in an age of ‘awake’ education with the audience.

Allison Schuster ’21, a research assistant at the Kirby Center, said she was a huge fan of the book.

“It’s so beautifully illustrated, but even more than that, I love the moral that he seeks to instill in his readers,” she said. “I received a signed copy of Dr Mehan’s book for my 4 year old cousin, and after observing the gradual influence of child rearing, my uncle said he really appreciated the messages.

Mehan will host a similar event, with an art exhibit and a book talk, at Hillsdale College on October 14.