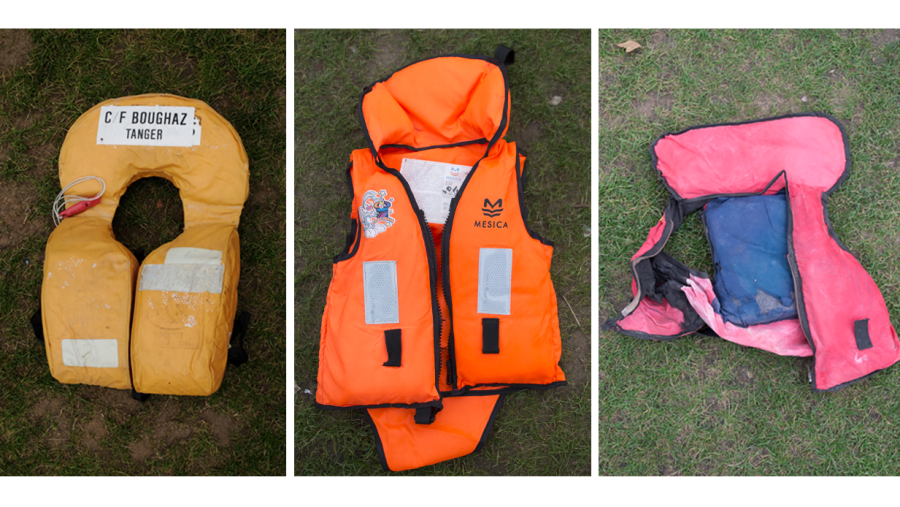 In September 2016, an incongruous sight appeared on the lawn of Parliament Square in London: some 2,500 used life jackets, laid out in a neat grid. Many of them were child-sized; one wore a Bugs Bunny sticker. Dumped on Greek beaches, they had been brought to London by campaigners to draw attention to the thousands of people known to have died trying to reach Europe in the past 20 months. With more than 4,500 migrants drowned in the Mediterranean alone, 2016 turned out to be the deadliest year in an ongoing catastrophe that dates back to the wars in Syria, Iraq and Afghanistan at the start of the 21st century. Those life jackets in Parliament Square represented lives staked and lives lost, but they also represented a devastating political failure.

Most modern borders start far from the border they are meant to defend. In the recent history of European border control, two events stand as grim markers: the 2016 EU-Turkey statement, under which Turkey was paid by the EU to prevent undocumented migrants from crossing the Aegean to reach Greece; and the 2017 Malta Declaration, under which the Libyan Coast Guard received EU funding, training and logistical support to prevent undocumented migrants crossing the central Mediterranean to reach Italy. These two policies, which are at the origin of the stories told by Matthieu Aikins and Sally Hayden, were designed, in part, to respond to the anti-migrant rhetoric of a resurgent right in Europe. They continue to influence the treatment of refugees on the continent, even as hundreds of thousands of new exiles now flee Ukraine.

In 2016, Aikins, a Canadian freelance journalist then based in Kabul, made the decision to accompany his Afghan friend Omar on his clandestine journey to Europe. “That way I could see the refugee underground from the inside,” he wrote. “And I wouldn’t have to leave my friend behind.” A former US Special Forces interpreter, refused asylum in the United States, Omar is driven by a desire to escape the indignity and dangers of Afghanistan, but also to settle in Europe in the hope that the woman he wishes to marry follows him.

For the purposes of his journey, Aikins becomes a Kabuli named Habib. His face and accent are such, we learn, that even customs officers at Kabul airport assume he’s Afghan — until he shows his Canadian passport. This type of interference has a lineage, as Aikins notes, from Robert Burton dressing as a Muslim to enter Mecca in 1853 to Jack London disguising himself as a “driver’s singlet” to enter the slums of London in The people of the abyss 50 years later.

The perils he faces on the road between Turkey and Greece – including kidnapping, should his true identity become known – are real; but they bear no resemblance to those of his traveling companions, who risk their whole future. When Aikins and Omar board an inflatable boat bound for Greece, they are intercepted by the Turkish Coast Guard, but escape into Greek waters and into the hands of the EU border agency, Frontex. They are then confined to the infamous, overcrowded Moria migrant detention center on the island of Lesbos. “The islanders were left to host camps for undesirables from Europe,” Aikins observes, although one of them is there under false pretenses. The couple decide to flee to Athens to avoid indefinite detention. While the only way for Omar to leave is to board a flight under a false identity, his Canadian friend does not need to resort to such a trick. “I didn’t have to do that,” Aikins admits at one point.

This fact animates Nudes are not afraid of water. And yet, in part because only Omar knows his true identity, Aikins’ odyssey never feels touristy, as it might in the hands of a less conscientious writer. As they are reunited in Athens, the reader senses that their decision to witness Omar’s journey first-hand and commemorate it is more than a matter of fieldwork or bravery; his journey has become something of a tribute to his friend, and perhaps even to those thousands of people who never reach safety.

If Aikins’ book is a tale of movement – a travel book of the most consequential kind – Irish journalist Sally Hayden’s is about stasis, horrifying stasis. In the heart, My fourth time, we drowned is an exposition of the EU’s complicity in the abuses and deaths of those who have approached its borders in search of refuge. The book focuses on the migrant detention centers that since the Malta Declaration have been established on Libyan soil – places virtually indistinguishable from concentration camps. For refugees from Sudan, Eritrea, Ethiopia and elsewhere, the centers have become closed slums of extortion, media gangs, slavery, rape, torture and murder.

In 2018, when an average of six people a day drowned trying to cross the Mediterranean, Hayden received the first of thousands of online messages, this one via Facebook, that would change his life: “We need your help,” he said. . “We are in bad conditions in the Libyan prison.” The anonymous sender, who had been briefed on Hayden’s previous reporting on migration to Sudan, was writing from the Ain Zara migrant detention center in Tripoli, where he was held. Having fled forced conscription in Eritrea, he had crossed into Libya to reach Europe, before being apprehended at sea. to intercept refugee boats, more than 80,000 people were sent back to Libya and to detention centres.

Hayden is scathing about agencies set up to help refugees on the ground, particularly the UNHCR, whose failures in Libya she lists with great bitterness.

Hayden’s account is made up of short messages in italics, among the multitude she has received from incarcerated informants over the years: “People want to die in the sea rather than in detention centers”; “It’s like hell. An abomination”; “In Libya, so many people died.” These missives seem intrusive at first, like a ringing in the ear, but come together to become a vital part of the book’s texture, allowing its subjects to respond to power – including the power of the author.

“To judge something, you have to be there”, wrote the Polish-British anthropologist Bronislaw Malinowski in Western Pacific Argonauts, his 1922 ethnography of the inhabitants of the Trobriand Islands. But “being there” in the age of Facebook isn’t what it used to be. While the migrant trail takes Hayden to Liberia and Rwanda, her book is not, primarily, a compilation of dispatches from the field. His most surprising report on this most global subject is produced from his London apartment. And yet, Hayden’s account is no less immediate or distressing for his physical estrangement. It is indeed this very remoteness that affords her such intimate access to her subjects, most of whom only know her in the form of a Twitter profile picture.

Hayden is scathing about the agencies created, in principle, to help refugees on the ground, in particular the United Nations High Commissioner for Refugees (UNHCR), whose failures she lists in Libya, and institutionally, with a lot of bitterness. In its description, the organization is simultaneously impotent, arrogant and corrupt. The accumulation of abuse, neglect and pleading voices in the book turns into a dizzying cacophony. No cry of pain is foreign. Reading it may feel like being begged by a desperate mob, but My fourth time, we drowned is the most urgent journalism.

The Eritrean proverb that opens Hayden’s epilogue – “There is no point in sheltering in a cave after the rain” – reads like a grim echo of the Dari proverb that provides Aikins’s title: “Nudes do not are not afraid of water”. Neither book makes anything so specific as a policy recommendation; in very different ways, they simply beg us to recognize the suffering that has been caused in our name.

Britain’s own border has, in a sense, moved closer to home since Aikins and Hayden began reporting, even before Putin’s invasion of Ukraine promised to create millions of new refugees. In November 2021, at least 27 migrants, from Iraqi Kurdistan, Afghanistan, Egypt, Somalia, Ethiopia, Iran and Vietnam, drowned when the dinghy they had boarded near Calais sank in the English Channel. The British government’s response to the wider humanitarian emergency has been the Nationality and Borders Bill. Currently being considered by the House of Lords, it aims, among other measures, to penalize asylum seekers who enter the UK illegally. Given that asylum in the UK can only be claimed on British soil and legal pathways through the resettlement lottery are minimal, these life jackets will continue to pile up on the beaches of Italy, Greece and, increasingly, from Great Britain.

The EU predicts that up to 4 million Ukrainians could join the global refugee population in the coming weeks and months. If the Home Office cannot be brought to offer sanctuary for purely humanitarian reasons, it might consider doing so out of tactical interest. As these two books point out, hospitality too can be an act of resistance.

Nudes are not afraid of water by Matthew Aikins, Fitzcarraldo £12.99, 384 pages

William Atkins is the author of ‘Exiles: Three Island Journeys’, which will be published by Faber in May