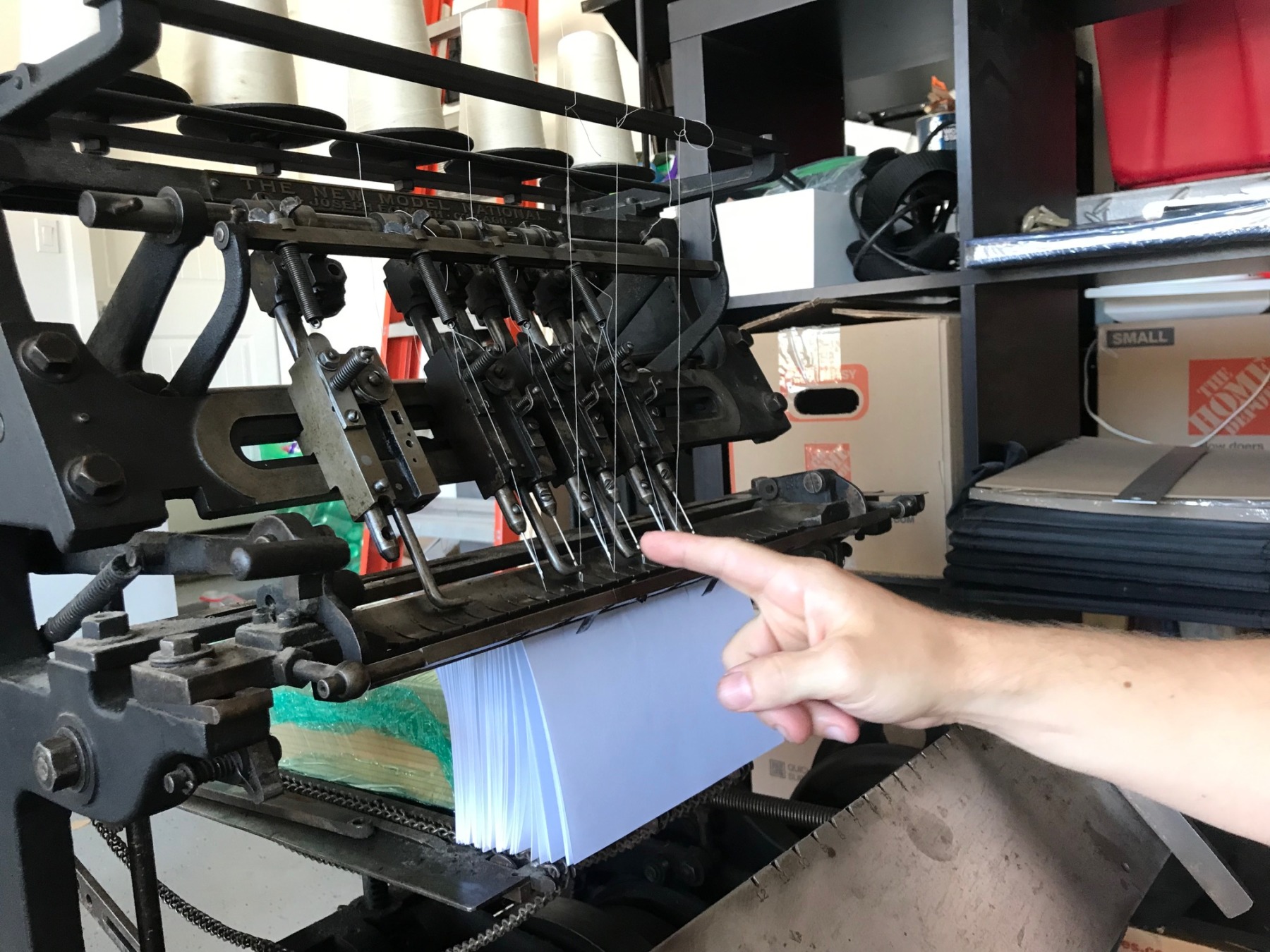 For most Oregonians, summer is the season to get out and relax. A respite from the winter rains, this is an opportunity to sunbathe, swim, hike and enjoy the daylight.

Evan Baden’s summer took a detour from that norm. The 37-year-old OSU photography instructor spent much of June through August hunkered down in his garage, launching his new publishing business Push Pull Editions. That’s where I found him on a recent visit to his suburban home near Corvallis, comfortably ensconced in a nest of steampunk-looking machinery.

Despite its preconceived warning – “my system is a hodgepodge” and “unimpressive” – ​​I was actually impressed with Baden’s setup. Various bookmaking components filled every available nook. He had collected them piecemeal from waste sources across the country, over the course of two years. Through a combination of donations and purchases, he had owned them and transported them to Corvallis. Taken together, they weighed a few tons and could have cost north of $50,000 bought new. According to Baden’s estimates, he had invested only a few thousand dollars.

The machines had arrived in various states of disrepair. But Baden had got them all back in working order with elbow grease and courage. They were now neatly arranged a few feet apart in a connected assembly line, some still on their shipping pallets. The operation looked like something out of an old Lewis Hine photo, but its function was quite contemporary. These were the basic tools of the Push Pull editions. The company name refers to analog film and the controlled dynamics of photographic exposure/development. As I listened to Baden animatedly describe his operation, I realized that Push Pull’s icon, a +/- symbol, could also represent a charged battery.

Baden was particularly proud of his latest addition, a National 1905 binding—an off-brand version of the better-known Smyth sewn binding—for assembling book signatures. He had acquired it several months ago, by which time it had not been used for years. The machine was so old and rare that Baden had trouble finding good information about it. He had called and tried this and that, pursuing various leads and dead ends. By his estimate, he had spent 50 hours of research time, and it had finally paid off. He had finally gotten the damn thing to work. It would now replace the hand-sewn method of early summer and cut half an hour of labor per book. The Industrial Revolution, as summarized in an example linked to the case.

As he described the binding to me, Baden provided a short working demonstration in the garage. Standing proudly above the National in fashionable oversized glasses (were they pink? Or how else to explain his all-systems optimism?), he buzzed with the exuberance of a mad scientist. “I learn everything as I go,” he later explained. “There is a lot of guessing, checking, luck and a lot of mistakes.” None seemed to have slowed him down.

In addition to the national sewer, Baden’s garage housed a Baum 714xl for folding printed sheets, a small binding machine perfect for gluing sewn book blocks, a hydraulic paper shear for cutting pages and book blocks uniform size, a cardboard shear for the cardboard cases, a “nesting” machine for gluing the end sheets into the book case, a Kensol K60 foil stamper for the cover graphics and a heavy screw press for flattening the finished books. Each occupied perhaps the volume of a telephone booth, in a garage that could be 300 square feet.

Cloth covers would not require their own machine. He simply made them by hand from card stock and fabric, with the help of an intern student. There were also shipping flats and a shrink wrap hair dryer, both easily tucked away in a corner. The only element that had to be outsourced was the printing itself. This was done by a Versant digital press at OSU. By Baden’s calculations, it cost 1/10th the expense of a traditional offset press, and the reproductions were virtually indistinguishable in book form. He had convinced the university to buy the machine, and it was now used for all class projects in the photo department. Push Pull could rent time and equipment during school downtime, especially in the summer.

It should be obvious by now that a startup editor has multiple moving parts and people. Coordinating them all in real time is a managerial feat. Baden had pieced together his brand new Push Pull through trial and error, initially spurred on by the pandemic.

By early 2020, he had found himself squeezed out of physical education. He and his wife had recently started a family. Travel was impossible and he faced an indefinite stretch of long hours at home. He had a longstanding interest in photobooks and physical expressions of photography, and in fact had been teaching zine and bookmaking for several years at OSU. The leap to running his own press seemed doable, but the learning curve was steep. It helped that sometimes ignorance could be bliss. Book publishing might be one of those fields that no one would enter if they actually knew in advance all that it entails. It’s perfect for an autodidact like Baden.

It was two years ago. Fast forward to September 2022, and Push Pull has just started publishing its first book release. The beginning is Schools for colored people by Wendell White, a study of segregated school buildings shot primarily in the Midwest. The design of the book is calibrated to historical racial tensions. It’s a solid 112-page hardcover, with crisp monochrome images. “I wanted the book to be heavy, so there’s a lot of black,” says Baden. “Black cloth, foil, and flyleaves… I see the heavy use of black in this book as a kind of mourning. The mourning of those who had to suffer in a segregated system, always underprivileged and then finally, during the integration of the schools, the loss of a teaching class which served as a beacon for the community.

The edition size is only 150. It’s a small run by traditional publishing standards, but not a total outlier in the increasingly boutique world of collectible photo books. Created by hand in the garage in Baden, they are closer in spirit to craftsmanship than products of mass culture. By keeping the operation on a small scale, it can minimize expenses and outsourcing. Baden does not require any initial financial contribution from authors, unlike many publishers. Photographers receive multiple copies of the finished book as compensation, as well as the satisfaction of their own monograph. The remaining editions are sold publicly to pay production costs. It’s a perfect local approach to the Willamette Valley, which is also in the upper echelons of the photography world.

Push Pull’s marketing strategy is somewhat smoothed by Baden’s teaching gig at OSU, which insulates him from the usually treacherous waters of photobook sales. “I have the advantage of not having to do this for a living,” he says. “I can choose the projects I want, and because of the verticality of my process, I’m not too concerned with profit. My main goal is to make beautiful, thoughtful extensions of artists’ work and break even.

It’s a promising system, and Baden is just getting started. After Schools for colored people, Push Pull has a handful of other projects in the works through Spring 2023. These include books by Ana Pearse, Fábio Messias, Jennifer Ray, Sara Winston, and Aaron Canipe. Each photographer is a personal favorite hand-picked by Baden, who has full discretion over publication choices. “I think a book as an object should reflect and contribute to the content it contains,” he adds. “A book is a new imagination of the work presented, and care must be taken not to distract from and hopefully elevate an already excellent work.”