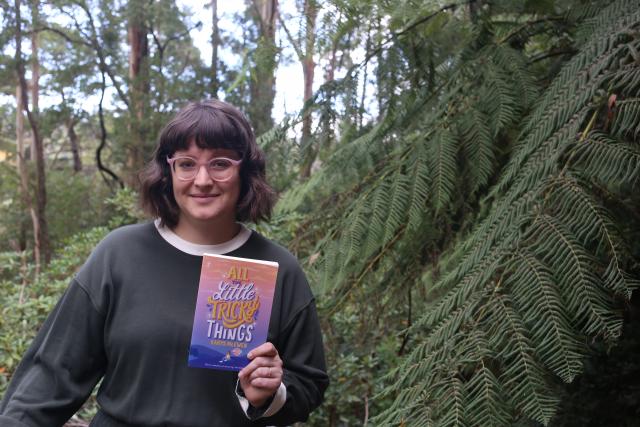 Olinda resident Karys McEwen launched her first fictional novel about the complications of living in a regional town throughout your formative teenage years.

“All the Little Tricky Things” follows twelve-year-old protagonist Bertie as she tries to move on to high school in the city while her friends stay in the small town of Merri where she has lived all her life.

Her best friend, Claire, lists all the things Bertie has to do over the summer before he leaves, only to show cracks in the friendship as they start working on the chores.

“It’s a coming-of-age story and a very quiet story, but hopefully it will feel really relevant to a lot of young people going through similar experiences,” Karys said.

The inspiration for the book came about after a conversation with two seventh graders in her role as a school librarian at a high school in Prahran.

But at the time, these feelings are so overwhelming that it’s so hard to see past them.

“So I thought I’d really like to write this story…about a youngster who’s worried about the future,” Karys said.

Like the main character, Karys also grew up in a country town, the difference being that her hometown is real and located in Western Australia. She said parallels can be drawn between the setting of her novel and the landscape of towns like Monbulk and Belgrave.

“I enjoyed the process. It never really felt like hard work. And at that time, I was just writing it for myself because I was just going to see how it goes…

“I really put a lot of my experiences living in the hills into the background.”

After sending the manuscript to her favorite Melbourne publisher for immediate acceptance, the two-year editing process began for Karys, who is also chair of the Victorian branch of the Children’s Book Council of Australia.

“It was interesting to be able to see the children’s literature industry from both sides,” she says.

Readings Carlton hosted the book launch on Tuesday May 3, with former students and colleagues in attendance to support Karys’ work.

“I’m really excited. But of course it’s scary to show your work to the world, and especially young people, because they’re so insightful – they know what they like and what they don’t. “, she said.

“[The students are] all my biggest supporters, so that’s really reassuring.

You can find more information about “All the Little Tricky Things” here https://www.textpublishing.com.au/books/all-the-little-tricky-things