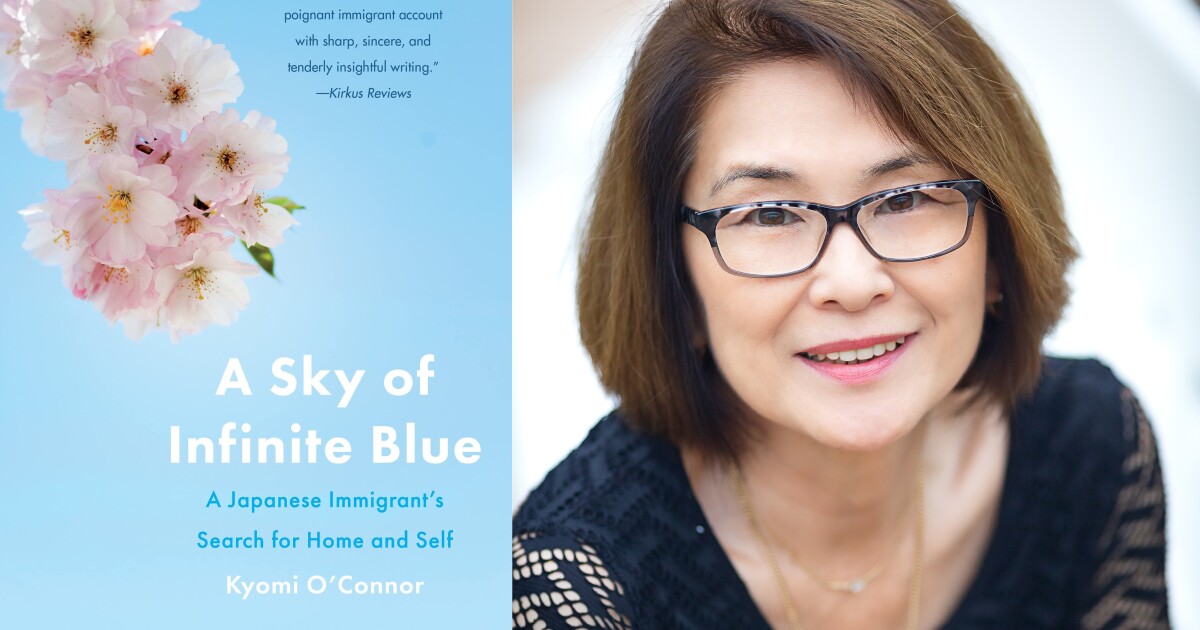 In ‘A Sky of Infinite Blue’, Kyomi O’Connor faces the ‘four sufferings’ and finds peace in her new memoir

Nine months after her husband’s death, San Diego author Kyomi O’Connor began opening the pages of her past, “bit by bit,” and writing her story.

“A Sky of Infinite Blue: A Japanese Immigrant’s Search for Home and Self” begins with a prologue that details her husband, Patrick, who died in 2016 of stage IV cancer.

O’Connor recounts her difficult childhood in Japan and the emotional abuse that led her to develop her ‘armour’, a reserve of steel to cope with which she described as ‘a cage I couldn’t free myself from’ .

There she met her husband, a cancer researcher, and they fell in love, got married, and started a home.

When O’Connor’s father died in Japan, she learned that he wanted her to become a member of a Buddhist discipline called Shinnyo-en.

After researching the organization, O’Connor and her husband became members and spiritual leaders. Their faith guided the challenges of their marriage and every step of the battle to fight an illness that ultimately defeated Patrick.

“A Sky of Infinite Blue” is a card for finding peace despite suffering and for regaining a sense of self after taking on the role of full-time caregiver.

Q: After your father died, you became a member of Shinnyo-en, a Buddhist discipline that aims to help all people find and use their innate goodness. You and eventually your husband, Patrick, are devoted to the practice. Ultimately, these teachings supported your efforts to help your husband, who was diagnosed with terminal cancer and died in 2016. An event you witnessed inspired the title of the book. Can you tell me more about what you experienced?

A: Every year, His Holiness Shinso Ito, the head of the Order, Shinnyo-en and the chief priest of Shinchoji Temple, holds an outdoor fire ritual called Saito Homa (homa refers to a fire ritual, but the one outdoors is called Saito Homa) which purifies our heart and soul, bringing out our wisdom. The foundation is based on the esoteric tradition. I had a very strong first impression at Saito Homa in October 2000, at the site at the foot of Mount Fuji in Japan. His Holiness was purifying the earth, our hearts and the world through ritual. Our mind was entering the sky and the sky was so blue, beautiful and inspiring. It moved me from the bottom of my heart and I was totally knocked out. “A Sky of Infinite Blue” refers to our infinite potential and possibility for humanity and peace.

Q: Buddhism names the four sufferings experienced by humans as birth and life (life), aging, disease and death. Your personal encounter with suffering has brought about many transformative changes. What impact does your point of view have today on your reflections on death?

A: Dying is a very personal and painful experience, and coping with the death of a loved one is especially difficult. However, there are many things in life that we cannot avoid or control. But we have the ability to overcome the unknown we face, including the four sufferings. I would still be able to cope with whatever comes next. We all have to take our time.

Q: You are a spiritual guide trained for almost 18 years and you give and receive advice. What was the last orientation you received?

A: As guides, we are able to accompany other practitioners on a spiritual path but we must also constantly train ourselves. We usually meet two or three times a month for mutual training. Sometimes guiding people who are still in the dark can be overwhelming. It is very laborious. The advice I received was, “Don’t be intimidated and always seek the light. Find the light within, even in difficulties. Walk along the light.

A: It was such a wonderful and eye-opening trip. When my story was accepted for publication, I had 125,000 words. But we narrowed it down to 85,000. In addition to publishing, publishing involves marketing and more. For me, it’s not just my book, it’s become our book. This is the culmination of all the contributions from She Writes Press, Spark Point Studio, writers from my local and national communities and global platforms like Medium and many others who have worked with me. I’m so thankful for that.

Q: If you could choose one general message when reading your memoirs, what would it be?

A: I have been through many challenges and tragedies in my life. I wish anyone who has suffered abuse, illness, or the loss of a loved one could heal from the past and finally find themselves. I did it. And I want to share the deeper feeling and love that we are all interconnected under the endless blue sky.

“Endless Blue Skies: The Search for Home and a Japanese Immigrant” by Kyomi O’Connor (She writes the press, 2022; 300 pages)

Luttrell is a freelance writer.

2022-08-28
Previous Post: Wilkes-Barre children’s book in the works
Next Post: Modern German art in the spotlight at the Saint Louis Art Museum