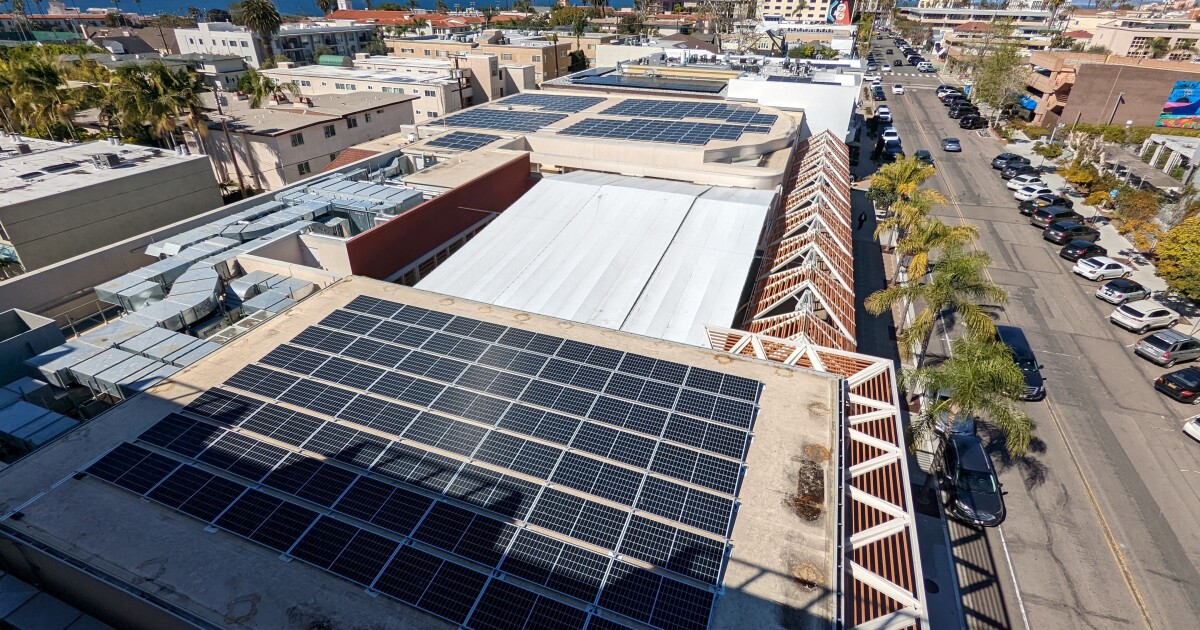 The Jolla Music Society this month completed installing an array of solar panels on the roof of its home, the Conrad Prebys Performing Arts Center. With 237 panels generating 425 watts each, the expected monthly energy savings are expected to be 25%, or more than $1.3 million over the next 30 years.

Construction of the Conrad was completed in 2019. Although the solar panel was not included in the building’s original design, the infrastructure was designed to facilitate future expansion, according to a press release.

Several students from La Jolla schools have been chosen as 2022 regional winners School Art and Writing Awardswhich honors teens in grades 7-12 in 28 art and writing categories.

The City of San Diego is collecting feedback through Monday, Feb. 28 on how it should prioritize infrastructure projects across the city. A poll has been created and can be found at sandiego.gov/prioritizingCIPsurvey.

The survey asks questions such as which projects the community needs most (from water pipes to parks, bike paths and libraries), how participants rate the streets and sidewalks in the community, and more. .

At a recent conference on how the city prioritizes infrastructure projects, Councilman Joe LaCava, whose District 1 includes La Jolla, said potential projects for funding are noted. The system “invests in our most needy areas, without allocating the same amount of money to all neighborhoods,” he said. “I fight for every infrastructure dollar for District 1, but equity is an important issue.”

He added that the city welcomes feedback “on how we should approach the scoring system, not necessarily individual projects.”

Timken Appoints La Jollan Jeanne Jones to Board of Directors

The board of directors of the Timken Art Museum in San Diego’s Balboa Park named philanthropist and cookbook author Jeanne Jones to its ranks.

Jones, a longtime La Jolla resident, has been involved with the Timken for years, including hosting its Orange and Black Gala and raising money for its various community programs.

The new children’s museum includes two La Jollans on board

The new children’s museum in San Diego recently welcomed 10 new directors to serve on its board, including La Jollans Lynda Forsha and Maryanne Pfister.

The Kiwanis Club of La Jolla presented a check for $1,000 Feb. 18 to Uli Heine, senior director of engagement for the nonprofit Global Communities.

The Kiwanis Club of La Jolla awards approximately $200,000 annually to area nonprofits, funded through the club’s annual half marathon.

La Jolla Presbyterian Church will be holding a blood drive in partnership with the San Diego Blood Bank from 8:15 a.m. to 1:30 p.m. on Sunday, March 6 at 7715 Draper Ave. in the Sun House Hall.

Donors must show photo ID, be 17 years of age or older, weigh at least 114 pounds, and be in good health. The blood bank recommends having a meal and drinking plenty of fluids before donating. To make an appointment, call (619) 400-8251 or visit mysdbb.org/donor/schedules/drive_schedule/70742.

The California Coastal Commission is still collecting feedback from residents on the City of San Diego’s proposed amendment to regulate the operation of short-term rentals and rental lodging platforms.

The next meeting of the Coastal Commission is Wednesday March 9th. The agenda has not yet been posted.

Comments on the STR Order are accepted by email at [email protected].

La Jollans can “fill the trunk” of local firefighters

Local firefighters will take to the streets on Thursday, March 10 for the Burn Institute’s annual Firefighter Boot Drive campaign. Hundreds of uniformed firefighters will be stationed at intersections across San Diego County to collect donations for the institute’s fire and burn prevention education and burn survivor support services. Banners with QR codes will be hung at participating fire stations throughout March for a contactless payment option.

Meeting with Principal Stephanie Hasselbrink will provide information about the school, its academic and enrichment programs, opportunities for parent involvement, UTK/Kindergarten-specific information and more ahead of the 2022 school year -23.

Hal Sadler, known as the “Mr. San Diego of modernist architecture” and responsible for the La Jolla Playhouse, among other projects, died Jan. 21 at age 91 from complications from a stroke.

His legacy also includes three bank towers on B Street, the San Diego Central Library, and the 2001 expansion of the San Diego Convention Center with its distinctive Sail Pavilion. He was also instrumental in many San Diego Zoo projects, including what is known today as the Dickinson Family Center for Lifelong Learning, Polar Bear Plunge, and Hippo Beach.

The percentage of international students at UC San Diego has dropped for the fourth straight year.

New figures from the Office of the President of the University of California indicate that the 8,159 international students who enrolled at UCSD last fall represented 19.5% of the university’s approximately 42,000 students.

Lawmakers began pushing in the past decade to enroll more students from California after some UC schools began recruiting heavily from foreigners, who pay more than double the tuition , helping campuses balance their budgets.

Last year, the Legislature told UCSD, UCLA and UC Berkeley that they must cut the number of undergraduate students outside of California by about 4%. This will collectively free up 4,500 slots for Californians over the next five years. — The San Diego Union Tribune

Warwick’s Bookshop in La Jolla is in partnership with United Way of San Diego County during a book drive until Thursday, March 31, to commemorate National Reading Day Across America.

Local businesses and individuals are encouraged to donate new children’s books to promote reading among students across the county. United Way hopes to raise 1,000 books through the drive. The books will be donated to children in need.

Donors can buy books online and choose from a list of recommendations on warwicks.com/wishlist/1 and in person at Warwick’s, 7812 Girard Ave.

– Compiled by the staff of La Jolla Light ◆