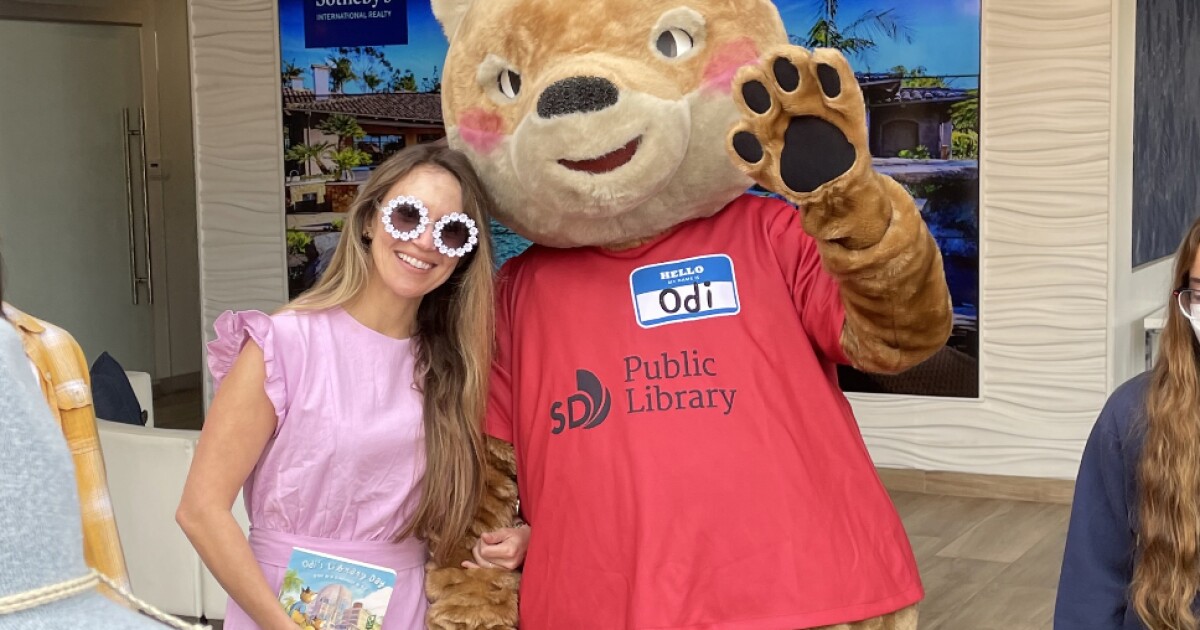 The Jolla Village Merchants Association and La Jolla/Riford Library presented a “Spring Forward Storytime Scavenger Hunt” on March 13 in The Village, including a scavenger hunt at various merchants, stories read by library and bookstore staff from Warwick, prizes and treats.

The free event drew about 135 children and 180 adults, organizers said.

In opposition to UC San Diego’s use of fossil fuels to generate electricity for the La Jolla campus, a group of protesters hung a banner on a campus bridge that spans Interstate 5.

The words “University of California, San Diego” are already embedded in the vertical netting along the bridge, and a banner hung next to it on March 1 reading “burning fractured methane.”

Adam Aron, a UCSD professor who specializes in the social psychology of collective action on climate change, was one of the protesters and said, “It’s an outrage that a university that has made key discoveries on climate change and global warming still burns fossil fuels for heating and lighting on its campus. This has been going on for years and we want the campus to make the right choices and change its practices. »

University spokeswoman Leslie Sepuka said the campus is “not burning fractured methane” and that “the university has a long-standing commitment to climate change research, education, innovative sustainability practices and real-world climate action with civic and community partners”.

She said the campus had built “one of the most advanced microgrids in the world…a flexible, resilient, reliable and secure power distribution system powered by a cogeneration plant, a fuel cell and solar panels”. The natural gas cogeneration plant is very cost effective and efficient, producing 75% fewer emissions than a conventional power plant.

UCSD will receive more than $7 million for one-time projects

UC San Diego will receive $7.35 million in community project funding as part of an appropriations bill approved by Congress on March 12. The one-time funds come at the request of California senators and members of the San Diego-area congressional delegation and are designed to provide critical infrastructure, health services and human resources and research resources to help the region to recover from the COVID-19 pandemic, according to UCSD.

UCSD projects approved for funding include:

The funds are part of more than $100 million in community project funding awarded to the San Diego area as a result of requests from the senses. Dianne Feinstein and Alex Padilla and Representatives Scott Peters, Juan Vargas, Mike Levin and Sara Jacobs.

The San Diego Planning Commission will hold a public hearing next week on the Windansea Barrier Project, which includes the construction of a gazebo (also known as the gazebo). The work would also include privately funded improvements to the public right-of-way and park to include posts and barriers and replacement concrete bench pads.

The hearing will be part of the committee meeting on Thursday 24 March, online.

Belvedere supporters say it is a replacement for a gazebo that was demolished in an act of vandalism in 1982. The new one, similar to others that line the La Jolla coast, would measure approximately 9 feet tall, 10 feet long, and 6 feet wide and constructed with historically accurate wood that can withstand ocean air.

Those who oppose the gazebo have said they support the repair elements of the project but are against the construction of the gazebo, citing concerns about erosion and visual impacts.

Learn more about the meeting at sandiego.gov/planning-commission.

The anthology contains 100 new stories from the San Diego community inspired by the COVID-19 pandemic that were entered into the San Diego Decameron Project in February 2021.

The book launch will include books for sale and authors in attendance, along with some short readings of their plays. Refreshments will be served.

To register for the event, go to bit.ly/decameronmars.

The city of San Diego has hired enough new library workers to fully reopen all city branches by June 30 and will follow a plan to add Sunday hours at 13 branches, including La Jolla, the manager says. from the Misty Jones Library.

The city’s 36-branch system has been slower to fully reopen than other area libraries due to staffing shortages during the COVID-19 pandemic and because the city’s solution to replacing workers at part-time by full-time employees took time.

Jones said the city may soon begin providing five-hour Sunday service at four branches and plans to eventually add Sunday hours at nine others, including La Jolla/Riford. She said it was possible she could complete the rollout of the new Sunday hours by June 30. – La Jolla Light and the Union-Tribune of San Diego

The project has already been completed along Avenue Girard. Now it moves on Pearl Street between Girard and Fay Avenues and Fay and Kline Street. “I believe the rocks serve an aesthetic purpose, but they will also reduce trips and slips,” Witt said. A timeline was not given.

A record-breaking live auction raised more than $335,000 for All Hallows Academy in La Jolla as the school held its annual fundraising gala March 5 at Coasterra Mexican Restaurant.

The event, themed “Sip, Sip Hooray: Bowties and Bubbles on the Bay,” was chaired by Claire Forrest and was the first time in two years that the school community was able to fundraise in person, by due to COVID-19 restrictions on gatherings.

Proceeds from this year’s gala will help cover tuition and fund a new on-campus sports field and recreational facilities to host basketball, volleyball and other events. All Hallows Academy is located at 2390 Nautilus St.

Several La Jolla organizations received a total of $28,000 in this year’s San Diego City Council Community Projects, Programs and Services Funding, which is awarded to nonprofits and public agencies for community needs, social, environmental, cultural and recreational activities that serve a public purpose.

The San Diego Unified School District is predicting a 95% graduation rate this year, in part because it expanded opportunities for students to earn course credit and because of a state law that has temporarily relaxed graduation requirements due to the COVID-19 pandemic.

If the projection holds true, that would be the highest graduation rate in the district since the state began calculating graduation rates in the current way in 2017. That would represent a jump of 6 percentage points from the rate from last year.

About 500 of graduating students, or 8%, are able to do so due to relaxed graduation standards, according to district data. — The San Diego Union Tribune

The Kiwanis Club of La Jolla Foundation presented the La Jolla High School Foundation with a check for $12,500 at the March 11 club meeting.

The funds will be paid to graduating seniors who plan to attend college.

– Compiled by the staff of La Jolla Light ◆