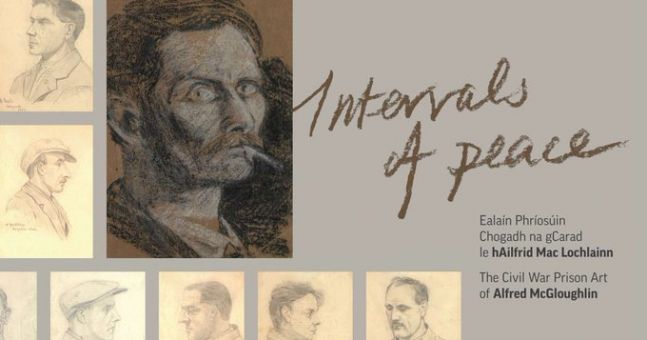 This week, never-before-seen Civil War portraits of prisoner and artist Alfred McGloughlin will go on display at the Kilmainham Gaol Museum.

‘Intervals of Peace’ is a brand new exhibition running at the museum from Thursday 31 March to 25 October 2022, which will feature 39 watercolor portraits and sketches by Mountjoy

On October 21, 1922, several months after the start of the Irish Civil War, Alfred McGloughlin was arrested at his home by Free State forces and taken to Wellington Barracks in Dublin.

He spent the following year as a political prisoner, first at Wellington Barracks, then at Hare Park in the Curragh, before a final stay at Mountjoy prison from where he was released on October 13, 1923.

Although he was an active supporter of the anti-treaty side, he was never charged with any specific offence. He experienced periods of severe mistreatment while incarcerated but, as mentioned in his 1932 obituary, he also found “intervals of peace in prison, sketching in watercolor and filling a portfolio with pencil drawings of his comrades”.

Alfred McGloughlin was also the nephew of 1916 rulers Patrick and William Pearse and grew up in the Pearse household. He then helped run Patrick Pearse’s school, Scoil Éanna.

He then became a draftsman with J & C McGloughlin Ltd., a decorative ironwork business owned by his father’s family, and studied art part-time at the Dublin Metropolitan School of Art.

McGloughlin also developed an interest in theater where he wrote and acted in numerous plays. He joined the Irish Volunteers and was involved in the Howth arms trade in 1914. He was Sinn Féin’s Electoral Officer in South Dublin for the 1918 and 1921 elections and stood as a candidate himself in the local elections of 1920.

After his release from prison, he started his own construction company, but when that failed, he got a job as a draftsman in the Bureau of Public Works. He remained active as a political journalist and was a regular contributor to the republican newspaper “An Phoblacht”. His health never recovered from his time in prison, and he died of heart disease aged just 44 in 1932.

The exhibition will be opened at 6:30 p.m. on Thursday, March 31 by Alfred McGloughlin’s daughter, Charlotte Groarke.