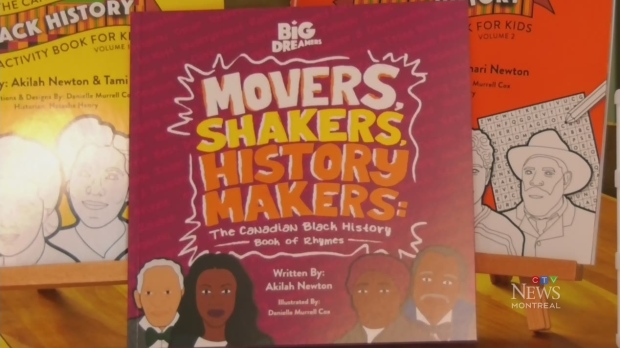 MONTREAL — Monday marks the start of Black History Month, and while the celebrations are different this year, they’re just as meaningful.

Every year during Black History Month, Akilah Newton and his brother Omari visit Canadian schools with a bit of edutainment entertainment beat poetry.

This year, they are still presenting in 75 schools, all virtually. Having traveled less, Akilah had a book published for young audiences.

“Movers, Shakers, History Makers: The Canadian Black History Book of Rhymes” is designed for elementary readers and their families.

“Representation really matters,” she said. “Children need to see mirrors of themselves. People like them do jobs they want to do so they can go on and dream those big dreams and achieve greatness. Because if they see someone doing something they want to do that looks like them, they’ll know it’s possible. For me, starting young, we shape the minds of tomorrow’s future leaders.

The rhyming educational verses have a storytelling flow, not too dissimilar to poet Amanda Gorman’s style that captivated many during Joe Biden’s presidential inauguration.

Akilah tells the lessons of the past in tangible ways, like the story of Canadian civil rights activist Viola Desmond.

“When they made the connection, they were actually in disbelief that Canada was so racist in the 1940s,” Akilah said.

In years past, Akilah has held book launch events where people featured in her books congregate.

This year, the launch is entirely online.

“In my opinion, if they have contributed to the Canadian landscape and changed the history of black people in Canada, they deserve to be celebrated,” she said. “People not in the book doesn’t mean they aren’t amazing, inspiring people, I just haven’t touched them yet.”

Akilah Newton has more books on the way. To learn more, visit bigdreamers.ca.