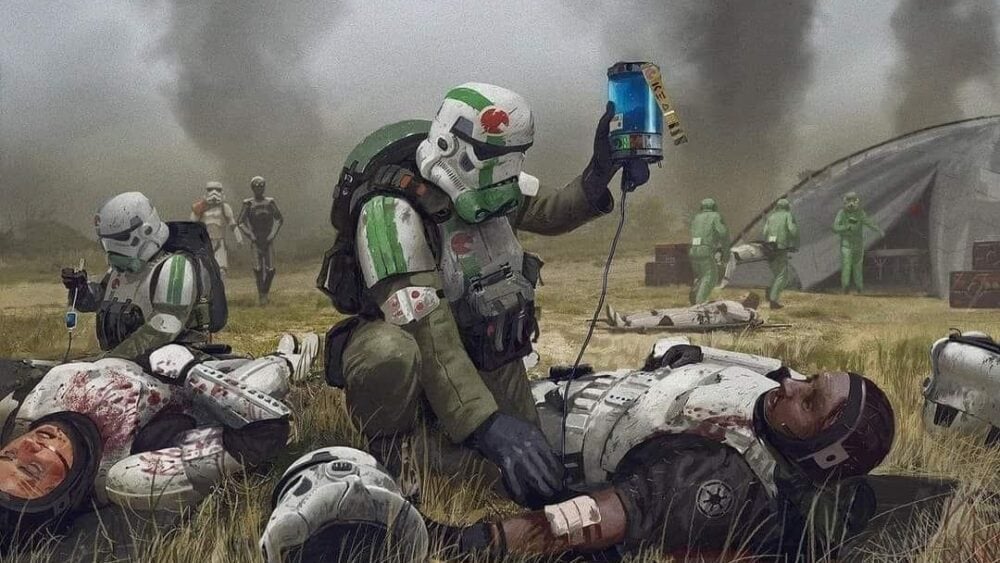 An exceptionally talented artist named Edouard Groult has created a series of stunning illustrations depicting the lives of Stormtroopers who served the Galactic Empire. Fans will be amazed by Groult’s images, which are undoubtedly among the finest examples of star wars fan art ever created. And seeing as the Stormtroopers are some of the most misunderstood characters in the set star wars franchise, you’ll likely be surprised at the emotional impact these images will have on fans who’ve never thought twice about how many Stormtroopers were killed during the Galactic Civil War.

The series of illustrations showcases the various tasks Stormtroopers would have performed in their daily lives, including participating in combat situations and assisting injured comrades, in addition to more mundane activities such as eating lunch and attend briefings from their squadron leaders (who can be identified by the epaulettes worn on their shoulders). Groult clearly has an eye for detail, and his illustrations help remind us that behind their shining white armor, each Stormtrooper was a person with real hopes and dreams beyond acting as brutal enforcers for the Empire, something which we would all do well to remember the next time we see countless Stormtroopers being gunned down by the Rebels, our favorite star wars movies. As you can see, several of the images also depict the Stormtroopers without their helmets, which serves to further humanize the faceless goons we all hated so much. Incidentally, the original Jango Fett clones were phased out during the Imperial era, which explains why none of the Stormtroopers unmasked in the footage are Fett clones.

All of Groult’s Stormtrooper images can be viewed below, and you can also head over to his ArtStation page to check out more of his works. And you’d be doing yourself a favor by looking at his entire portfolio, because Groult is clearly an illustrator whose work deserves display in art museums.