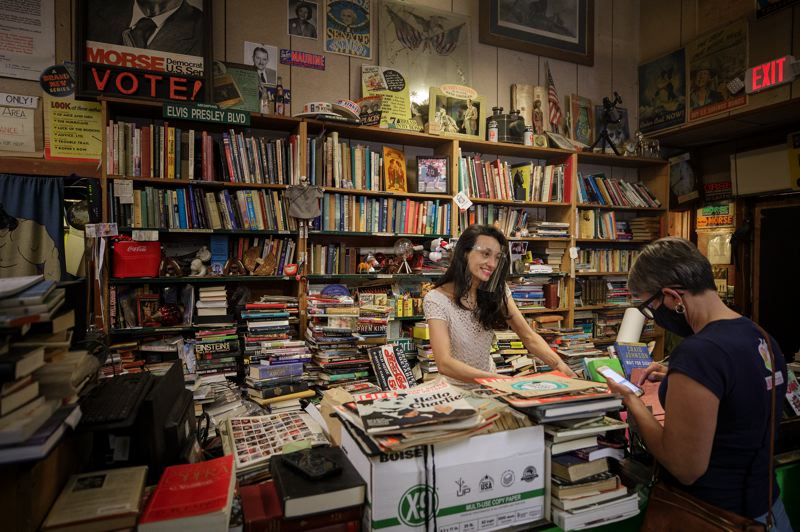 After 83 years, Portland’s oldest bookstore will close Saturday, April 24 due to the pandemic, economic hardship and pressure from landlords; mandatory packaging.

PORTLAND, Ore. (PORTLAND TRIBUNE) – The store with the faded sign at 336 SW 3rd Ave. has reached the end of the line. At least in its current location, according to current owner Crystal Zingsheim. The store will close Saturday, April 24 at the end of the day, “but we’ll probably be here as late as everyone wants,” Zingsheim told the Business Tribune on Friday.

She did media interviews between in-person client requests, most of which were for vintage magazines and commemorative issues as birthday gifts: a 1950 Time magazine, or just for fun, an 1896 Ladies Home Journal. .

Cameron’s Books stores mainstream books, loosely categorized, but has a valuable periodical archive upstairs. Without a written or computerized system, Zingsheim says she’s the one who knows where everything is – and the only one who can access it. Now 37, she has worked at the store since she was 17. When people donate books, she’s usually the one who decides whether they become inventory or recycling.

The back room, stairs, and upstairs stacks are currently cluttered with legacy media boxes. Stacks of magazines slip underfoot and Tupperware bins tip over. In one place is a box labeled “reading glasses”, in another the duct tape microwave is blocked by a Plexiglas cube containing the contents of a room in a dollhouse. There’s a Hoarders vibe, but Zingsheim messed up the “crazy hustle” to pack it all up and go.

A U-shaped storage gallery seems inaccessible, but as Zingsheim explains, “I’ve been climbing around this bookstore in the dark barefoot for 20 years.”

The Upper Archive where they keep thousands of pulp novels and magazines in plastic sleeves. It’s better organized. This is where Zingsheim has to run to meet the demands.

On Friday, she was trying to delegate customers, fill orders and delegate. She warned customers to stay six feet apart because of the coronavirus, but that was difficult in the store’s cramped space, where some shelves end in quiet reading nooks.

Friends helped answer phone calls. At one point, she shouted out her phone’s PIN so they could handle a digital payment, for which she introduced Venmo, CashApp, and PayPal. “I have no privacy!” she said laughing.

She closes shop because of several factors. The COVID-19 shutdown a year ago put them behind on their rent, and although they offered to make it up in October, she says the landlord refused the money.

The owner, JDSY 3RD STREET, which also owns the Golden Dragon strip club on the second floor, wants the bookstore to come out as soon as possible. For a long time, they had a “love deal” and paid rent at the 1960s rate, $1,250 a month. Prior to COVID-19, rent had risen to $2,500 per month, which is still a bargain for 5,000 square feet downtown.

Vandalism and roaming scared patrons from the block, even though Cameron’s windows were untouched. The store has been robbed several times. The thieves unknowingly sent staff to search for books, then stole the money from under the counter. Zingsheim says shoplifting is also on the rise.

The storage honeycomb that the previous owners built while being in one place for 60 years will make it difficult to move.

“There are fragile documents from the mid-19th century to the present day, so every time you move them, you risk damaging or even destroying them.”

Zingsheim dreams of digitizing documents that are in the public domain, but it’s a big job. After Saturday, she says they will have to rent a 52ft container to store everything and rely on friends for help.