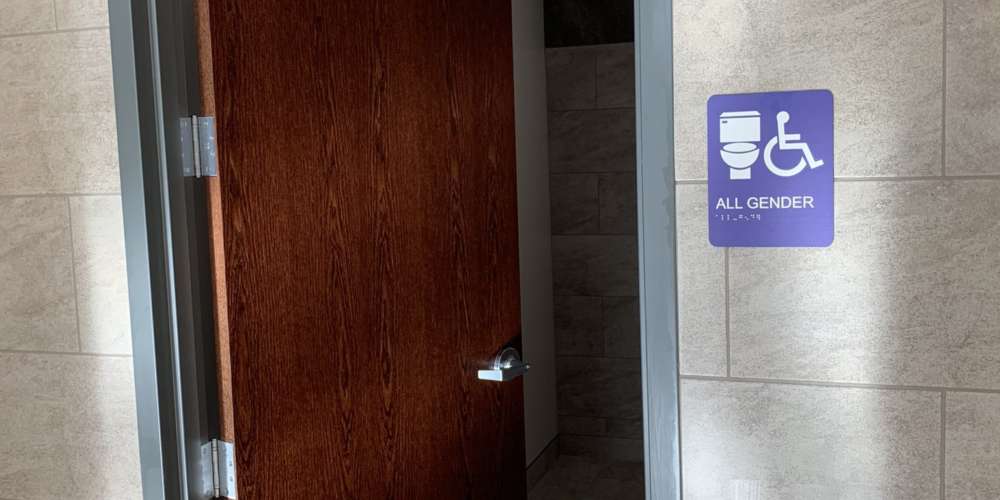 “The survival of our children is in danger”

A proclamation targeting transgender students and Colorado’s public housing and non-discrimination laws, approved by the Monument Academy board of trustees, drew criticism from parents, students and district staff members during of an education council meeting yesterday.

Monument Academy is a public charter school in School District 38 in Lewis-Palmer, near Colorado Springs.

The proclamation states that “the Board believes that current Colorado legislation, referred to as SB 08-200 and HB 21-1108, jeopardizes the innocence, well-being, privacy, and safety of our students” and that “The Council considers that the use of gender-specific shared bathroom facilities and the use of a gender-specific shared changing room by the person of biological sex are protected by the right to privacy of a person who ” expresses” or “identifies” as a non-biological gender under Amendment IV of the Constitution of the United States of America.

The document goes on to proclaim, “The Council strongly believes that all laws passed by the United States Congress and the Colorado General Assembly that impose specific instructions or that [Monument Academy] follow specific instructions regarding non-biological “gender expression” and/or “gender identity” to determine use of biological sex-specific communal washrooms, biological sex-specific communal changing rooms, and participation in sports gender-specific athletics; violate natural law, moral truth and expose our students to undue prejudice, confusion and dysphoria” and encourages parents to “raise your voice as active and engaged citizens by reaching out to your elected representatives at the state and nationally asking them to take a stand for the privacy and protection of our students.

The issue of trans people’s access to facilities consistent with their gender identity has not only been addressed in Colorado law, but has also been challenged in the United States Supreme Court. the Grimm v. Gloucester County School Board the case affirmed the right of transgender students to use facilities that conform to their gender identity, citing Title IX protections and the precedent set by the Bostock v. County of Clayton case, which found that discrimination against gay and transgender employees violated Title VII of the Civil Rights Act of 1964.

In Colorado, discrimination against trans students was ruled illegal in the 2013 case of Coy Mathis, a 6-year-old trans girl who successfully sued Fountain Fort Carson School District 8 after seeing herself deny access to appropriate toilets.

Concerns over the proclamation of Monument Academy come after the previous meeting of the D38 Board of Education saw parents criticize the No Place For Hate club at Lewis-Palmer Middle School. They viewed the Anti-Defamation League program as “indoctrination” of students.

“I imagine most, if not all of you on the council are parents,” said Megan Pemberton, a D38 parent. “Many of you may have LGBTQ children, and like me, you want the best for your children. The Trevor Project believes that a young LGBTQ person, ages 13-24, tries of committing suicide every 45 seconds in the United States. This risk is reduced by 40% when young people have an assertive adult in their lives. Who are the adults who are assertive with our children eight hours a day? How do they manage to identify? Because without them, the survival of our children is in danger. A few weeks ago, my second child came home from school completely out of control. You see that child is gender fluid, has short hair and dresses to support how he feels that day.Another college kid approached them and told them that they should be ashamed of being gay and that they should just go ahead and commit suicide. I was shocked. In my naivety, I truly believed that we were teaching our children to do better, to be better. Unfortunately, I do not believe that my children’s experiences are unique. I believe that if you ask any of the young people sitting behind me tonight or any of the kids in our schools who identify as LGBTQ, they will share that they too have experienced the same hatred, the same anger and the same vitriol as my children, a lot on a daily basis.”

Jessie Pocock, executive director of Inside Out Youth Services, a Colorado Springs nonprofit that supports LGBTQ youth, said in a statement, “It is never appropriate to stigmatize and discriminate against a child. This proclamation from the Monument Academy School Board sets a dangerous tone of targeted discrimination against LGBTQIA2+ students. By proposing a policy of actively denying legal protections to students, the Board’s behavior shows a general disregard for the health, education, and safety of those it has the honor and responsibility to educate. We are so disappointed by efforts that seek to dehumanize our youth. Our Safe at Schools Coalition continues to deliver on its commitment to ensure that all students in the Pikes Peak area have access to equitable education in a safe and nurturing environment.

For Inside Out, Monument Academy’s proclamation is the latest example of intolerant behavior by school officials.

On February 22, Inside Out published an open letter calling out not only Monument Academy, but also Colorado Springs School District 11 school board members Al Loma and Jason Jorgenson, for what they called “transphobic” posts. on social media.

A student-led protest is planned for the February 23 D11 Board of Education meeting.

In an e-mail from February 21 to Colorado time recorder, D38 Director of Communications, Mark Belcher, said: “D38 management is aware of the recent proclamation passed by the Monument Academy Board of Trustees. At this time, D38 management has had no conversations related to this proclamation. This recent proclamation is not currently an agenda item, and we do not anticipate that it will be added to the agenda. D38 will evaluate the proclamation, and at an appropriate time in the future, we will notify our community of this evaluation.

Charter schools, despite being public schools operating within a school district, have a degree of autonomy that regular public schools do not have and are able to enforce specific rules and policies, such as uniforms and curricula, which public schools don’t have. Monument Academy is governed by its own six-member Board of Directors.

In an emailed statement, Ryan Graham, the chairman of the board, said: “The issues and challenges facing Monument Academy are not unique to any school in this state. The culture wars have landed on our doorstep and as chair of this board, I expect us as a school to stand firm and unwavering in our ability to protect the privacy and well-being of each of our students.

The motivation behind the proclamation is to clearly state our position regarding SB 08-200 and HB 21-1108. The Board strongly believes in protecting the innocence, well-being, privacy and safety of all our students. Under current law, every school in this state is required to impose specific instruction on people who express or identify as a gender that does not correlate with their biological sex; concerning the use of the toilets, the use of the locker rooms and athletics. These laws expose our students to undue prejudice, confusion and dysphoria.

We are aware of the Coy Mathis v. Fountain Fort Carson School District decision in 2013. This does not negate the fact that we as a board have a duty to protect the privacy of our students by seeking legislative change. As you know, a proclamation makes a statement and it does not violate the law. As stated in the proclamation, we call on our parents and constituents to raise their voices by letting their legislators know that they must take a stand for the privacy and protection of all students.

My eyes are open to the truth, and I am not blind to the consequences of stating this position, but I will stand up to protect all of our children.

While the Monument Academy proclamation is concerning for LGBTQ advocates, Mark Silverstein, legal director for the ACLU of Colorado, says the proclamation itself is protected by the First Amendment.

“We stand ready to step up to defend the rights of trans people,” Silverstein said. “We support the Colorado law. We support the clarifications made in recent legislation, and when we heard of violations, we either wrote a letter or were prepared to take legal action. At this time, insofar as the Academy is merely declaring the Academy’s position on the Bylaws, the Academy certainly has a First Amendment right and a Colorado Constitutional right to record its position as opposed to legislation. . It’s when the Academy begins to violate the statute in a way that it suggests it might do, but hasn’t actually said it will, there might be grounds for action in justice.