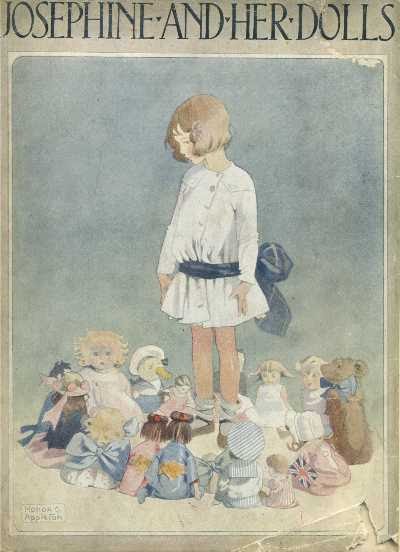 In 1916, the dark and carnal year of the First World War in which more than 1,300,000 young men fell dead or wounded in the battles of the Somme and Verdun, a slim and unassuming children’s book was published. Josephine and her dollsthe first book in what was to become a series by Mrs. HC Cradock, each illustrated by Honor C. Appleton (1879-1951), is, to the best of my research, the first children’s book to directly address warfare from the point of view of a child. perspective.

Children up to the age of seven are, according to the great developmental psychologist Jean Piaget, in a phase of preoperative development in which, for example, the child can behave towards dolls as if they were real people; the border between fantasy and reality is not yet well drawn. A child of this age uses dolls to make sense of the world around them, taking in new information and often confusing stimuli and adapting to them through the dramatized behavioral interaction of the dolls.

Stress and anxiety are dealt with and lessons learned in the child’s imaginary scenarios. New words, phrases, the surrounding emotional landscape, adult behavior – sensory, cognitive and affective flow – are all integrated into doll play through which chaos becomes even fantastical, orderly and some degree of understanding hit. Children’s doll play, however imperfect and formless the mirror, reflects the adult world.

The created doll play tables may not make sense for adults, but they do for the child in perfect childlike logic. Doll-play is the living theater of pre-pubescent absurdity, Pirandello dolls are characters in search of a juvenile playwright to bring them to life to act and make sense of that child’s world in the incomprehensible adult world .

Writing a children’s book using a doll’s play scenario as a narrative device is therefore an inspired choice; the book is not written for children by an invisible, anonymous, omniscient adult, but rather by a child, with a face and a name, to be shared with their peers, using a familiar mode of play. Which, ultimately, makes reading the book a recreational activity, a very positive association.

The first chapter opens with little Josephine introducing us to her family of dolls, a cavalcade of sixteen personalities. And then, without further preamble, Josephine takes us on the subject of her childhood drama. 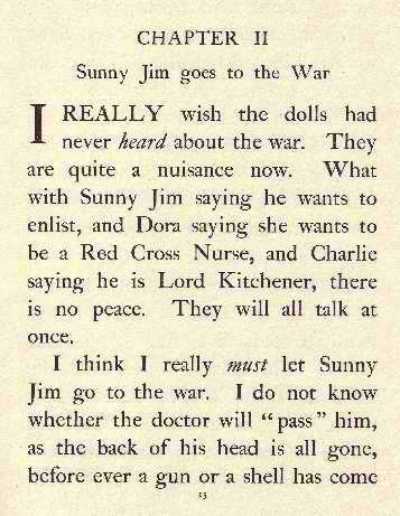 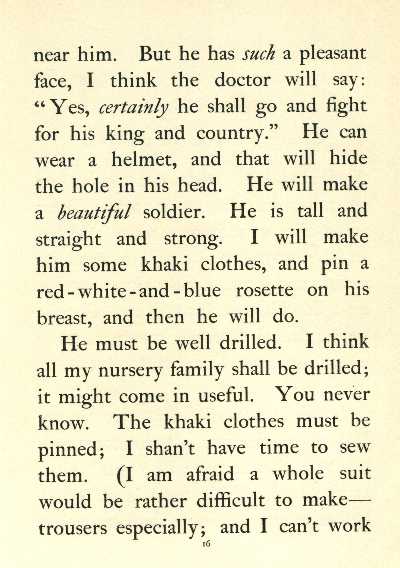 Josephine’s doll drama follows the typical arc of war, beginning with her patriotic call to arms and the enthusiasm of young men to heed it, test their mettle, and hopefully grow into men. … Followed by a family’s fears for the safety of their loved ones.

The battle is then engaged and the harsh reality addressed. Doll Dorothy is injured and brought in on a stretcher. “We [Josephine and the dolls] decided that she should be a wounded Belgian, and that Dora and Rachel should be Red Cross nurses, and the boys soldiers. “Doll William is chosen to be the German Emperor (Kaiser Wilhelm) because of his name on his face,” Josephine says. William is not a happy doll.

“The battle was very fierce and raging, and many were injured and killed. So the Red Cross nurses bravely marched onto the battlefield, and waved a white flag, and everyone stopped to fight; and they said to the Emperor, ‘Please, Sire, can we take the wounded and tend them? And he said, ‘Yes, you can’, and they did .”

After the battle, William pleaded not to be Emperor anymore, and Josephine allowed him to be the doctor as long as he promised to become Emperor again, if necessary. The doctor was busy:

“Little Teddy was the first injured to be brought in. His leg was cut off. But he was very brave and never once cried. Then Patrick came in. He could barely walk…” Quacky-Jack enters on a stretcher. The Doctor gives them each a piece of chocolate to make them feel better. 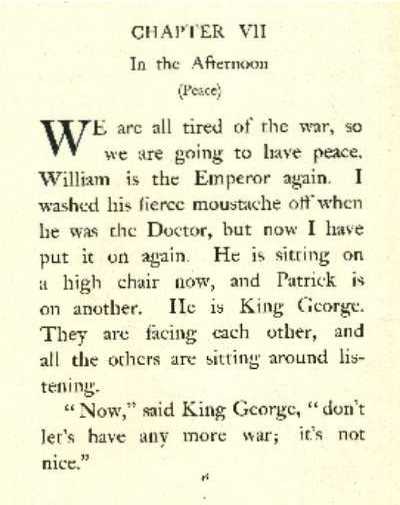 No, this is not the case.

“‘Okay,’ said the Emperor of Germany.

“So they shook hands, and became friends again, and everyone clapped.”

Lo and behold, World War I reduced to childish understanding, a family feud gone horribly wrong, first cousins ​​King George and Kaiser Wilhelm (grandchildren of Queen Victoria, as was Tsarina Alexandra of Russia ), and King George and Tsar Nicholas first cousins ​​through their mothers, in a monumental spat with catastrophic consequences, the family tree falling on Europe and the Middle East, the warning, Framework!ignored with a grotesque result. 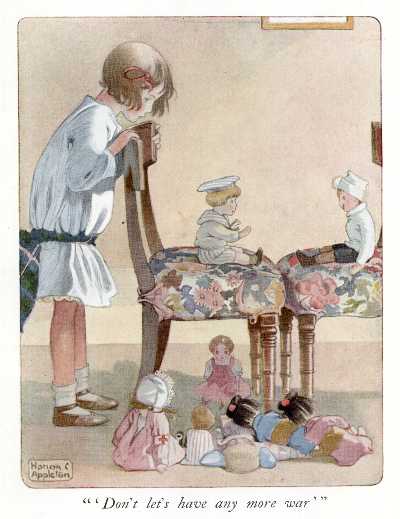 “‘Now children,’ I said looking at them all gravely, ‘let this war be a lesson to you all.

I don’t think I was able to capture the power that Cradock as Josephine brings to this simple narrative. Whether Mrs. Henry Cowper Cradock (1863-1941), née Augusta Whiteford, teacher, intended or not, she wrote a great anti-war novel for children, though unheralded, best read, perhaps, by adults. And provided further proof that if you want a problem broken down into its simplest, clearest essence, pruned from its foliage and without adult sophistry, ask a child.

Josephine and her dolls is, in his own quiet way, the youthful precursor to In the west, nothing is new (1929), an anti-war story written, rather bravely, I think, in the midst of the Great War, not after, and from a child’s perspective. It’s the anti-child crusade, and a gently pointed warning that it’s all gone too far, that the adult doll masters have, in their own fantasies, utterly failed; real people don’t bleed excelsior.
The book is also quite rare, with no copies having been auctioned in the last thirty-six years and OCLC registering only ten copies in libraries worldwide. 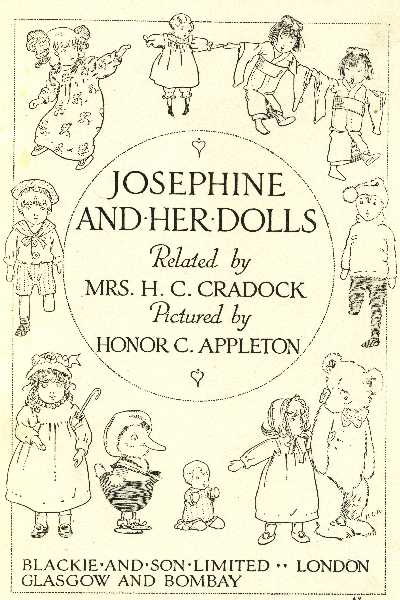 As youngsters routinely destroy them within 72 hours, dust jackets for this volume, as with many old and/or rare children’s books, are rare.

Disclosure: In a previous incarnation, I studied and practiced occupational therapy in pediatric and geriatric settings, effecting my psyche. internship at the UCLA Neuropsychiatric Institute. OT, the first allied medical profession to embrace mind-body holistic treatment (in the late 19th century), uses goal-specific daily activities meaningful to the patient, including dolls, as a core therapy modality. That’s why, I guess, I find this little book so extraordinary.

2011-07-05
Previous Post: The author talks about a children’s book about Yuna Kim
Next Post: Luke Ives Pontifell: A Devotion to Craft Books