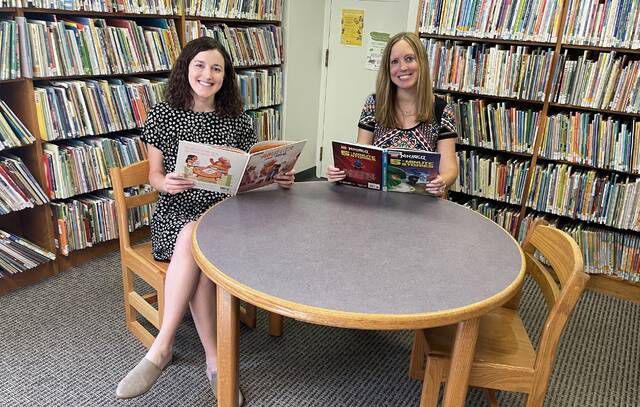 Wilkes-Barre children’s book in the works

WILKES-BARRE — While downtown business is usually the focus here, today we’re focusing on a collaboration between many downtown institutions and individuals working toward a common, fun goal.

The Osterhout Free Library with Times Leader, Coal Creative, Diamond City Partnership, WVIA, Wilkes-Barre Preservation Society, Etruscan Press, City Councilor Tony Brooks and Melinda Bennett came up with an idea that started around a cafe – produce a book based in downtown Wilkes-Barre – and make it a reality.

Osterhout’s Director of Development and Community Relations, Amber Loomis, explained how it all happened.

“I was meeting Kerry Miscavage (editor) of The Times Leader at one of my favorite places, Abide, and we were basically talking about different ways we could collaborate on something together that would be cute and fun for the library, but also cute and fun for the community,” Loomis said.

Miscavage added: “Reading and visiting the library has always been one of my favorite things to do. In the summer, I jumped on my bike and was able to go to two different libraries. Today, I still read a lot and contribute to a weekly column in the Times Leader on Wednesdays. As a newspaper publisher, it’s important to me that as a community we support libraries and children’s reading. Also, we have such great local history here in the Wilkes-Barre region and I thought it would be fun to collaborate with Osterhout Library to produce a children’s book on local topics. Amber agreed and she took over as head of development. Times Leader is proud to be a contributing partner of this special project.

With the idea set, Loomis said, “So we just started off first with like, ‘Who from the community could we involve in this project?'”

And with that question, the aforementioned who’s who of downtown personalities came together.

Then we had to focus on what the book would look like. Loomis said one of the children’s book committee members jokingly suggested the story revolved around a young Tony Brooks, and Loomis and the team found the idea “adorable”. Given Brooks’ extensive knowledge of the city and his involvement not only on the city council, but also with the Preservation Society, it seemed like the right choice. Brooks shared photos and stories of growing up in the city, and so the lead character was cast.

After drawing inspiration from the favorite children’s books of those involved, the next step was to find an author and illustrator. A call to action has been issued to involve even more people in the community. Potential candidates submitted their ideas and the committee confidentially voted for their favourites. 15 writers and five illustrators responded, including previously mentioned Melinda Bennett.

Bennett, of Forty Fort, has illustrated children’s books in the past. Loomis said, “I learned it was something she did every year for her two daughters.” And so his involvement in the project was fixed from the start. However, she still answered the call with some of her illustrations, and although Loomis said the competition was tight, with each illustrator extremely talented, Bennett was chosen.

For an author, Maddison Black was chosen, given her creative writing sample. Although she recently moved to Las Vegas, Black is a NEPA native, a Wilkes University graduate, and more than familiar and up to the task.

“Our goal,” Loomis said, “is to try to keep everything as local as possible. We want to give back and put things back into the community with all of this.

While there’s no set date or price yet, Loomis said the committee’s goal is to have copies ready to go for the holidays. All profits are donated to Osterhout’s many free library programs, such as the Object Library, among many others.

“The library has been in the community for over 133 years. It’s nice to be able to collaborate with other local organizations and businesses in the area to do something fun and unique to showcase the town of Wilkes-Barre. I am really delighted that the library is involved in this project. It’s a big undertaking, but I think it will be worth it,” Loomis noted.